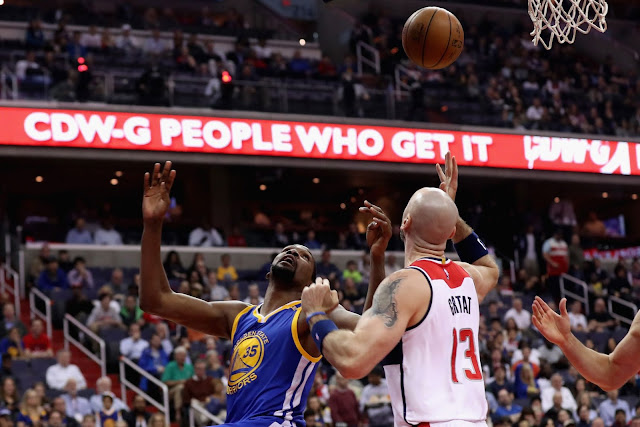 Last night the Golden State Warriors suffered a 112-08 loss to the Washington Wizards, but worse than that loss Kevin Durant went down with a knee injury after Marcin Gortat tossed Warriors center Zaza Pachulia to the floor and he fell into Durant's knee hyperextending it. Durant left the game and the Warriors feared the possibility of missing their superstar forward for the remainder of the season to a serious injury. The MRI results are in and it seems Durant merely suffered a sprained MCL:

All in all, good news for Kevin Durant and Warriors, team says: Sprained MCL, bone bruise. He will be re-evaluated in a month.
— Adrian Wojnarowski (@WojVerticalNBA) March 1, 2017

This might be best cases scenario for the Warriors and Durant, as the impact looked like it could done some serious damage. If Durant only misses a month then he could be back in time for the start of the playoffs. With a 4-game lead over San Antonio with just over 20 games to go they should be able to hold onto their 1st seed out West. Here's a look at the impact:

A scary moment for the Warriors for sure, and to me this highlights exactly why it was a mistake for the Celtics not to fill a need of rebounding and rim protection. Injuries happen in a flash just like Durant's unfortunate situation last night, he was merely just standing near the paint and a 270-pound center fell into his knee. So for the Celtics (the two seed in the Eastern Conference) not to add a piece to shore up the front line could be a huge mistake.

Maybe they were in on Andrew Bogut yesterday and tried to acquire him, but they could have dealt for him or another option before the trade deadline last week without breaking the bank. Bogut was essentially a salary dump in the Nerlens Noel deal and the Celtics had plenty of chips to play with. Every other contending team in the East (Cleveland, Washington, and Toronto) made a move, or several, to address team needs down the stretch - the Celtics made none. Are the guys at the end of the Celtics bench really that untouchable? C'mon.