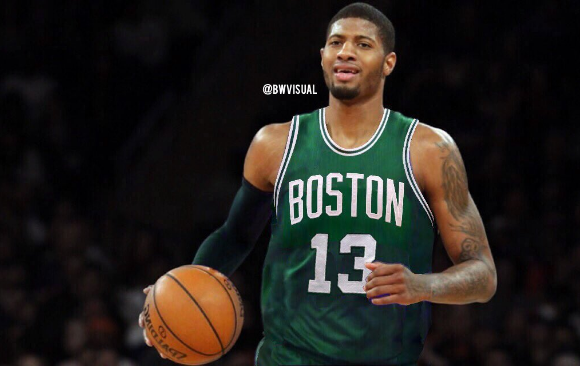 We are just outside of twenty-four hours away from the 2017 NBA Trade Deadline of 3 P.M. Thursday, February 23rd.

We're almost there, folks. One way or another, we'll have a much clearer idea of what the roster - and maybe several years' worth of rosters - may look like by the time the sun starts to set tomorrow. All conventional wisdom suggests a big move is unlikely, but this is the one time of the year when conventional wisdom is up against the wall, upended by panicky general managers trading for their jobs - or new and inexperienced ones looking to make a big impression.

Where exactly, then, do we put the unexpected temblor that was the DeMarcus Cousins trade earlier in the week? Perhaps the incompetency wracking the Sacramento Kings office is so unusual, it deserves its own category. The question is - will it be contagious? The New York Knicks have recently made a stab at challenging the Kings for the "Most Dysfunctional Franchise" aware (this should be a real thing, voted on by GMs and players anonymously) with the internal but very public strife erupting between both current and historically great players and the front office duo of Phil Jackson and James Dolan.


There's even been signs the Chicago Bulls, Indiana Pacers, and Los Angeles Lakers have come down with the sniffles, if the sniffles near the trade deadline mean uncertainty in their rosters, management, or both, and suggests danger looms for these clubs if they make the wrong decision in the next day or so.

The question is - what's the wrong decision?

Will the Bulls perhaps not trade a player they should, and end up firing a coach they shouldn't? Will newly-minted President of Basketball Operations Magic Johnson make the right move and let his new General Manager, Rob Pelinka, a former (as in the sun has not yet set twice on that change) big-league NBA agent, evaluate talent? Will Pelinka sign all his old represented players to above-market deals (we Boston fans can only hope so.) ? Will Larry Bird hang onto Paul George too long, only to see him walk away for nothing? Or perhaps cut a sweetheart deal with his old team in much the way Kevin McHale did in 2007? At least one other general manager in the league (according to Marc Stein) thinks so.

With that all on the table, let's see who's moved - and who might still, if the rumor mill is to be believed - since we last tested the waters last Sunday:


DeMarcus Cousins, Omri Casspi, Tyreke Evans, Buddy Hield, Langston Galloway
We know you know. And you probably know that Terrence Jones wants a trade from the New Orleans Pelicans as a result. Possibly also that Matt Barnes has been cut, and should be snatched by a team off waivers given he's still a productive player at 37. We won't go crazy here - we know you know by now - check the linked content on the odd chance you don't.


Lou Williams, Corey Brewer
These two traded roster spots on their respective teams (the Los Angeles Lakers and Houston Rockets) last night, along with a 2017 first round draft pick heading to the Lakers. Not a bad first move for Magic-as-President, and actually pretty solid for the "we could care less about defense, just shoot" Rockets, either. The Lake Show gets more ammunition for their rebuild while arguably getting worse when they need to to retain a top-three pick to avoid conveying it to the Philadelphia 76ers, and the dropoff in scoring should help mightily in that regard without having to take on more than next season in dead money. Houston gets a scorer who sucks at defending, which is not much of a priority in Mike D'Antoni systems.

MAJOR PLAYERS (REPORTEDLY) ON THE BLOCK


What would be great is if one of Isaiah's kids accidentally tweeted the eyes and IT is blissfully unaware of how woke Celtics Nation is.
— Chris Forsberg (@ESPNForsberg) February 21, 2017


Andre Drummond
Aside from Isaiah Thomas and Big Penguin making eyes (possibly at each other?) and some changes to Dre's Twitter profile, the odds are long on this league-leading rebounder moving to the team arguably most in need of rebounding. The removal of all references to the Detroit Pistons may signal Drummond's frustration with Coach and President Stan Van Gundy, but the fact Stan is even taking calls shows the fallout is real. The problem is, at least for Boston, the key to unlocking Drummond's explosive potential relies on him moving away from the basket, at least on defense, something he's been unwilling to do under Van Gundy. Could a new coach get the big man to buy in? Are his shooting warts and tendencies to check out when frustrated to great a risk with his $22 million deal? We'll know if so and for whom very soon.


Jimmy Butler
Reports seem to be bubbling up that the ask by the Chicago Bulls is too much, insisting on including Jae Crowder and ... well, we don't know the details, but it sounds like the Bulls want Jae and at least this year's Nets pick plus other firsts and young talent. Also, there's whispers the famed "Gar/Pax" duo may not agree on the right path forward, one trying to keep butts-in-seats, the other banners overhead. All this means effectively nothing we haven't heard before, but we're keeping an eye on this, and we're sure you are too.


Paul George
Indiana has been shopping their 2017 first round pick to try and get some help for George, on record recently for saying he wants to play for a winning team. It's no secret he's been less than thrilled with his usage and the direction of the Pacers, so whether or not Larry Legend can shake an impact player free in the next day or so remains to be seen. If you don't hear anything by noon on Thursday, this could be the one to watch.


Blake Griffin
With reports that Chris Paul has verbally agreed to a new deal with the Los Angeles Clippers, it seems at least a little of the pressure is off of Doc Rivers and company to win now. Could this translate into Blake resigning with the Clippers after this season? Or is he still a potential candidate to move in a trade? It's harder than ever to say, though talks between Boston and the Clips have reportedly been on- and off-again.


Carmelo Anthony
He's not going anywhere he doesn't want to. Boston, reportedly, is one of those places, though, and rumor has it he's not off the table with the front office in Beantown. He's not a great fit, he's got long-term commitment without top-tier talent, and thus seems incredibly unlikely. This is probably correct, but if getting Melo in green only takes salary match and a non-lottery first rounder or two, this could be the move nobody saw coming - except me and the 36 other people who are begrudgingly open to such a move if it comes cheaply enough.

OTHER PLAYERS ON BOSTON'S RADAR


No word yet if calls have been made on Terrence Jones, who could provide a lot of what Ainge et al need (rebounding, rim protection, scoring), but given his cheapness and flexibility (positional and contract-wise), don't be shocked if this is one of the minor moves Danny is famous for pulling value out of. Andrew Bogut is a potential buyout candidate, so don't expect a significant offer from Boston (or anyone) as a result, though a trade involving salary match and possibly second round picks could happen if Boston feels there's no good moves to be had by mid-day. PJ Tucker, Larry Sanders, Nikola Mirotic, and other smaller moves may also be on the horizon if they can bolster rebounding, shooting, scoring and rim protection on the second unit - but probably only if it involves no long-term salary, and requires no major assets.

That's what we know for now - but keep your eyes peeled for updates, both on the site and on the CelticsLife Twitter. We're sure to see some other movement in the next day or so of time remaining - the question for all of us (and, we assume you, given you're still reading) is - will the Celtics be involved - and if so, for whom, and at what cost.

For more stories about the trade deadline on CelticsLife, click here. For more by Justin, click here.