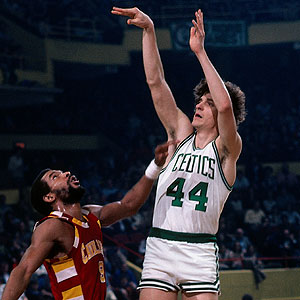 Today, January 22nd marks the 37th anniversary of "Pistol" Pete Maravich signing with the Boston Celtics in the twilight of his famed career.

Maravich began his pro career with the Atlanta Hawks, who drafted him with the third pick of the 1970 NBA Draft after three seasons playing for Louisiana State (1967 - 70). Pete's Hawks collided with the Celts in the playoffs in his second year in the league, but were eliminated five games to two. After that season, Maravich's play elevated to elite level, rising to the sixth-highest scoring player in the league his third season, and second-highest by his fourth.

Pete was traded to the expansion New Orleans Jazz between his fourth and fifth season, and while he certainly helped fill seats, he was asked to do too much, with little success (sounds....familiar for NOLA). By his second season with the team, injuries began to affect Maravich, and by his fourth, he was missing much of each season due to injuries. He would fall out of favor with the head coach of the Jazz the season they moved to Utah for his inability to practice, eventually being placed on waivers and signing with the Celtics.


Maravich would only play 26 games in green, averaging 11.5 points per game on a squad with a rookie Larry Bird, pushing the team to 61 wins and giving Pistol Pete his first whiff of the postseason since his first years in the league with Atlanta. Maravich retired after his lone season with the Celts, unwilling to punish his knees any further, and tragically died after playing a pickup game, never having realized he'd been playing his whole career with a heart defect.

Here's a clip of Pistol Pete's last game in commemoration of his Hall-of-Fame career:

Powe, who attended Cal - Jaylen Brown's alma mater - was drafted by the Denver Nuggets 49th in the 2006 draft, and immediately traded to Boston. Leon struggled somewhat his rookie and sophomore campaigns, failing to meet the statistical benchmarks required to guarantee the second and third years of his rookie deal, but the Celts kept him anyway on the strength of late-season performances and, most notably, Game 2 of the 2008 finals, where he put up 21 points in just 15 minutes of game time, helping Boston to a 108-102 win and Banner 17.

Powe would play one more season with Boston before signing with the Cleveland Cavaliers, but knee problems and a roster crunch would see him waived, then signed by the Memphis Grizzlies for the remainder of the 2010-11 season, his last in the league. He would continue playing in Puerto Rico until retiring in 2014.

Vrankovic played much of his career in Europe, renowned as a shot-blocker, before coming to Boston in 1990. His reputation as a rim protector did not translate to the NBA, however, with him never recording better than his first year with the Celts, .8 blocks and 1.9 points per game. Stojko would return to Europe after the 1991-92 series, later returning to the NBA in 1996 for a season with the Minnesota Timberwolves (and a sophomore Kevin Garnett, then playing small forward) and a pair of seasons with the Los Angeles Clippers before returning to Europe for two years  to end his career in 2001.

Here's a selection of some of Stojko's best blocks in green:


Data via basketball-reference.com
Photo via NBA.com
Follow Justin at @justinquinnn