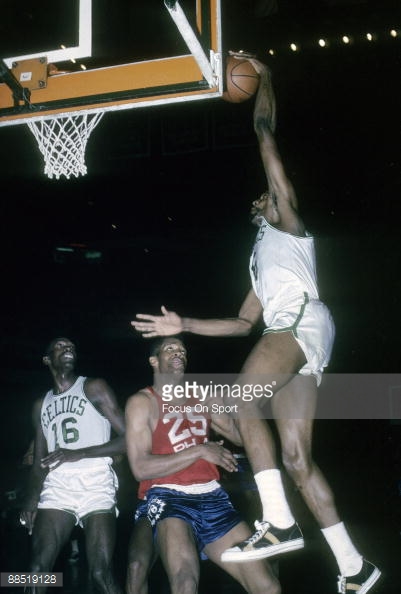 "Sustained Excellence" is a periodic series looking back at the 50th anniversary of Bill Russell's coaching debut season, and at the Celtic dynasty in general.


Those seem like the kind of words that would have been uttered in relatively recent times by an older and more reflective incarnation of William Felton Russell, the kind of insightful emotion that induces a man to write a sentimental book like Red and Me (2009).

In actuality, that prediction was made at the Boston Celtics’ traditional season-ending gathering on the heels of their 1966 championship – arguably the first thoughts Bill chose to share with the “guys” in his new role as their coach.

In his 13 seasons as a professional ballplayer, Bill Russell played for two coaches – the latter being the man in his mirror – and had one Boss. (The Celtics didn’t even employ an assistant coach until John “See It!” Killilea joined Tommy Heinsohn on the bench just in time for Dave Cowens’s MVP season.)

By contrast, in his 14 seasons, Wilt Chamberlain signed a contract to play for four different teams (in two leagues); twice was traded; was enjoined from suiting up – in anything other than a loud leisure suit, that is – but allowed to serve as bench coach for the ABA’s San Diego Conquistadors in 1973-74; and had never had the same coach for more than two consecutive seasons, not even in high school.

And while the Dipper did toil under the leadership of eight different NBA coaches, it’s equally fair to say that Chamberlain, just like Russell, had only one Boss – Wilt answered to no one but himself.

[Editorial Note: There are two miscalculations above. Van Breda Kolff's "With Wilt Pct." is actually .671, and Schayes's "W/O Wilt Pct." .375. To my knowledge, the win and loss totals are accurate -- though it's noteworthy that Wilt lost 70 games to injury in Mullaney's first season (1969-70).]

Now when Mr. Chamberlain and that “self” resolved to get something accomplished –never to foul out of an NBA game, to average 50 points per game for a season, to lead the league in assists, even to dethrone the mighty Celtic dynasty – the odds were pretty good that goal would be attained, even if the achievement worked to the detriment of his team.

For Wilt, it was as if an NBA court were a stage, HIS stage, upon which he gave command performances – all other roles were supporting. The season he averaged the 50, he was putting up 35 shots a game.

Russell, on the other hand, viewed his workplace as a battleground – the only thing that mattered was victory, the only numbers of significance the final score.

There’s an oft-told story of a private meeting between Auerbach and Russell upon Bill’s joining the team 25 games into his rookie year following the Melbourne Olympics. When Red’s prize recruit acknowledged, with an uneasy smile, that he did indeed harbor a reservation or two regarding his offensive skill set, the Boss said these words:


Okay. I’ll make a deal with you today, right here and now. I promise that as long as you play here, whenever we talk about contracts we will never discuss statistics.


Thus Bill Russell, the player who introduced verticality to the sport, was ever cast as the “purist” who “got it” – a conservative traditionalist. And this, of course, relegated Wilt to the role of prodigious contrarian about whom Jimmy Breslin pondered in The Saturday Evening Post “Can Basketball Survive Wilt Chamberlain?” way back in 1956.

The weird irony in all this is that in actuality, each man was the complete opposite of his basketball caricature. Chamberlain was a card-carrying, Richard Nixon-supporting Republican capitalist; it was Russell out there on the front lines of the civil rights movement. While Wilt was running a hot night spot in Harlem, Bill financed the establishment and operation of a rubber plantation in Liberia. 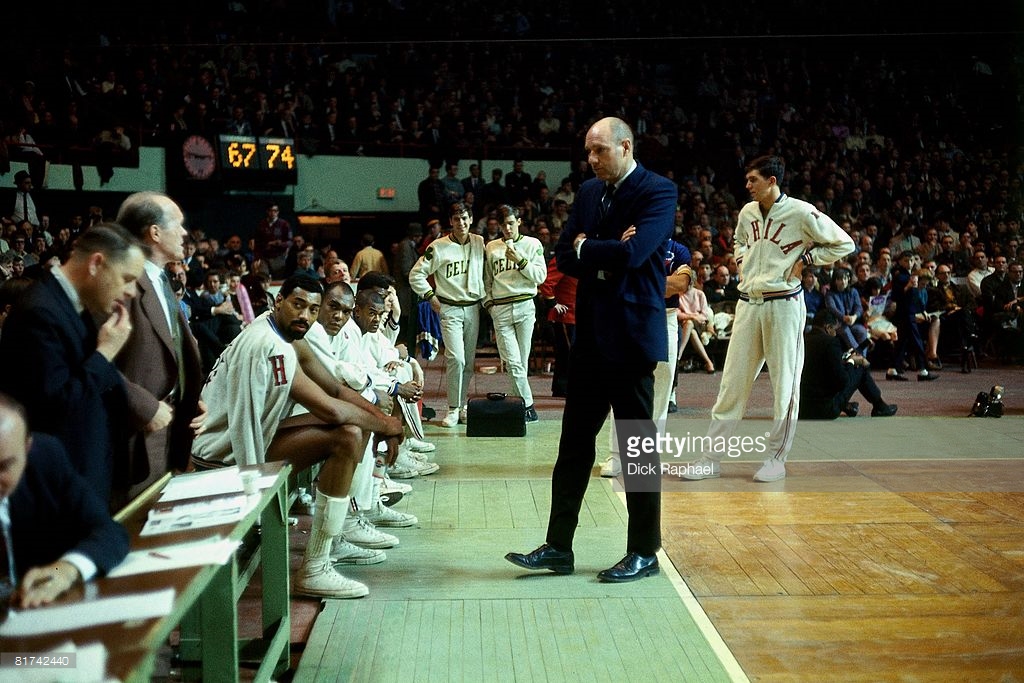 For the 1966-67 season, 76er owner Irv Kosloff had brought in Alex Hannum to fine-tune a 55-game winner into a championship unit. The big, burly Hannum (who’d led Wilt and the ’64 Warriors to the Finals), never one to back down from any encounter, welcomed the challenge. Billy Cunningham tells of an early-season incident when Hannum kicked everybody but Wilt out of the locker room, ready to throw down.

The Big Guy still demanded his minutes (45+ per game) but took only 14 shots a game, good for 24 points. He posted an astounding .683 FG% and dealt out nearly eight assists per game.

But the most significant “sacrifice” Wilt was willing to make for his new-old coach was establishing a residence in The City (Philly, that is) instead of commuting to work from his New York City apartment as had been his habit even back in the Warrior days.

At his Hall of Fame induction in 1979, two of Wilt’s coaches were on hand – Frank McGuire, who oversaw his play at its most statistically overwhelming level (after having foiled it in the 1957 NCAA title game), and Hannum, with whom Wilt would enjoy a lifetime rapport – similar to the one Russell had foreseen for himself and his mentor. 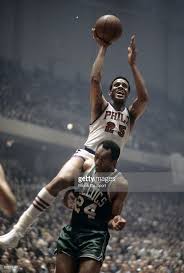 On Saturday, Nov. 5, 1966, Hannum led his undefeated squad into the Boston Garden for the second of their nine regular-season match-ups with the Reigning-and-Defending’s. Through seven games, Hannum’s troops were storming through the opposition by an average count of 130-119. Nine separate players could boast a double-figure scoring game. A different guy, five in all, was topping the scoring charts every night. Chet Walker had scored a career-high 36 points and then 30 more in the prior 48 hours alone.

Combined with the eleven victories with which Dolph Schayes’s Sixers had closed out the preceding regular season, Wilt and Co. were seeking a 19th consecutive win, one shy of the record held by a Washington Capitol squad coached by Mr. Auerbach.

That night, the motivated Celtics throttled the 76ers’ high-powered offense early, limiting them to 17 First Quarter points while assuming a control of the game they would never relinquish. Player Russell had been instilled with ample “irritation” over the prior seven days by his coach to register 26 rebounds. Indeed, Boston earned their 105-87 victory on the boards, where they held a mind-boggling 86-54 advantage. And 24 errant free throws – seven off the hand of the no-longer-sizzling Mr. Walker – further sealed the Philly Phate.

The capacity crowd (13,909, of course) was witnessing Bill Russell and Wilt Chamberlain compete on an NBA court for the 100th time.

(In light of the current uncertainty re. Ray Allen’s HOF eligibility.)

Wilton Norman Chamberlain last played pro ball on May 10, 1973 – oddly enough losing a championship to a coach called “Red.” (He went out with 23 points and 21 rebounds.)

He was enshrined in Springfield with the Class of 1979, right on schedule.

But Wilt was unaware that the curtain had fallen on his playing days.

You see, after that Finals loss, Wilt signed a three-year agreement to become player-coach in San Diego. But Chamberlain’s deal with the Lakers, though fulfilled, still included the notorious “Reserve Clause.” The ensuing legal wrangle extended well into the new season, Wilt’s playing career on hold.

Late in one game that season, Coach subbed out rookie forward Tim Bassett when he was within an Offensive Rebound or two of setting a new league standard. Wilt sent the youngster back into the game, saying, “Go ahead, son, that record will be mine as soon as they let me play.”

Maybe the Hall of Fame should be grateful they got around to Wilt when they did. I don’t suppose the Big Guy ever stopped thinking he could still play.

At least he showed up to accept the honor, which is more than can be said for Big Bill.