Sustained Excellence: Who Knew Walter Brown Had Such a Temper? 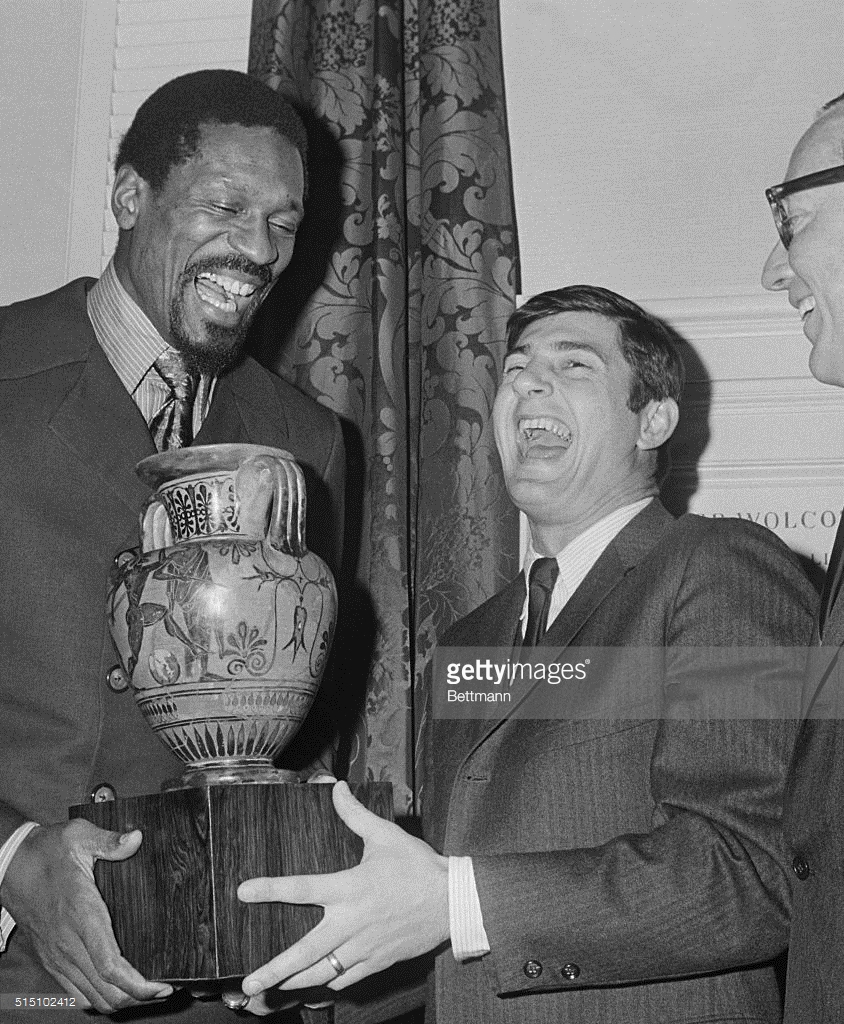 Catching Lightning in a Bottle … a performance for the ages that no one could ever have predicted.

The 1967 “Impossible Dream” Red Sox are a perfect example. While some may have foreseen a monster Triple Crown season for a 27-year-old Carl Yastrzemski, a Cy Young-worthy performance from some college kid named Lonborg? Unfathomable.

The Sox launched that stranger-than-fiction season April 12 at Fenway in front of fewer than 9,000 fans.

The very night prior to that Opening Day, a larger and more robust gathering had celebrated the rather decisive conclusion to an entirely different style of success – indeed the polar opposite of catching lightning in a bottle.

What was brought to an end that April Tuesday in Philly’s Convention Hall – to the parochially joyous chants of “Boston is Dead!” – was “Sustained Excellence,” a sustained excellence unparalleled in pro or college hoops. (Track and Field’s Al Oerter is about the only athlete who stayed on top longer, as ESPN’s Bob Ryan points out – by contractual obligation, if I’m not mistaken – at least twice a year.)

On April 11, 1967, the Boston Celtics were eliminated from the NBA playoffs for the first and only time in the 1960’s, ending a string of eight consecutive championships – to this day, an unprecedented and unmatched run of Sustained Excellence.

As the impact of our games has expanded and exploded through the years, the accomplishments of teams from early eras seem to become blurred. The Celtic dynasty comes to be viewed as a “stacked deck” of Hall of Famers – Russell wasn’t so great a player, any coach could have won with those guys, blah-blah-blah!

In point of fact, the tumult that was the 1960’s eluded neither the NBA nor its paragon of Sustained Excellence. Wilt Chamberlain’s contentious contract squabbles – replete with threats to retire, jump leagues and/or rejoin Abe Saperstein’s GlobeTrotters – were an annual amusement. 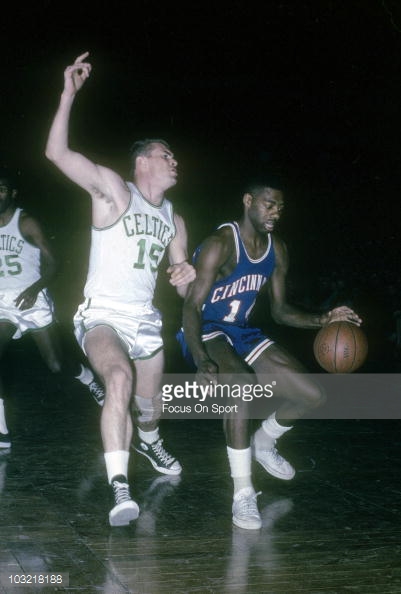 But did you know that the gregarious Tommy Heinsohn and the C’s kindly, genial owner, Walter Brown, did not exchange a single word for upwards of three months while the team was marching to Banner No. 7 during the spring of 1964?

Mr. Brown was hosting that season’s NBA All-Star Game at the Garden, a key piece of business for the league which had only recently lost its national TV contract with NBC and was seeking a new one. A young Roone Arledge and ABC were interested enough to televise the game as part of their assault on the Wide World of Sports.

Heinsohn, who’d seemed to have an interest in and an aptitude for business even as a young player, had been recruited into a leadership position with the fledgling Players’ Association by its founder, Bob Cousy, and Tom took over the Presidency upon his teammate’s retirement.


The Cousy-era guys were consolidating to address scheduling (particularly the number of exhibition games), travel and accommodation, and other such mundane matters. By the time Heinie took over with a much more aggressive leadership style – he was known to stroll into the Garden’s visitors’ locker room and confront guys over unpaid dues – the “Owners” had not yet officially recognized or met with the “Players,” whose concerns by then had expanded to the hiring of full-time, traveling trainers and the establishment of a pension plan for retired players.

By the early ‘60’s, even though a good many games were still staged in “neutral” outposts all along Nat King Cole’s “Route 66,” the NBA had outgrown its small markets and expanded its budding brand to the Left Coast. With an insurance-executive-in-training’s eyes and instincts, Heinsohn wanted the “Players” to have a say in this business enterprise.

Accordingly, Tommy-Gun and a few cohorts – successor-to-be Oscar Robertson among them – had journeyed at their own expense to a Board of Governors meeting in New York City as the ’63-’64 season was getting under way. The players were never granted admission, cooling their heels in the lobby for an entire afternoon.

The “Players” counter-punch was to come, largely at the urging of Heinsohn, during the All-Star Game in the form of an ultimatum – No Meeting, No Game. 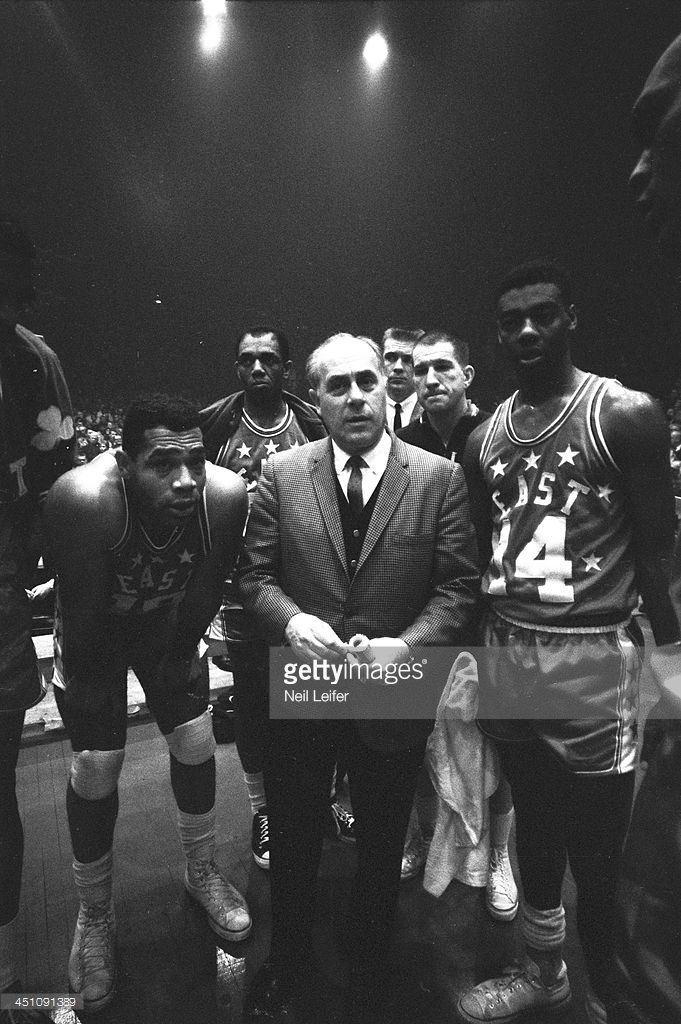 As fate would have it, the Northeast was hit with a blizzard that January weekend. The Saturday social calendar got wiped out, and players were still arriving to the city Sunday morning. The ABC-TV crew, however, was all set up, unleashing Pavlovian anticipation of a whopper rating from such a captive prime-time audience in both Arledge and the owners.

By late afternoon, a delegation of players brought their concerns to new Commissioner Walter Kennedy. But less than an hour before the scheduled tip-off, and by the narrowest of margins, the 20 best hoopsters in the world voted to boycott the game due to the owners’ intransigence and stone-walling.

Naturally, this development induced a flurry of activity and voices, not all of them civil.

Auerbach implored Heinsohn to relent in deference to Mr. Brown, but the “Players” stood firm until Kennedy gave them assurances of both access and a voice. The game, though slightly delayed, was played and aired as scheduled – and the NBA soon was back on national TV regularly.

Walter Brown, known for his Irish temper as much as his soft heart, was livid, refusing to talk even when Tommy dropped by his office a few days later. He genuinely believed that he and Red had been sympathetic to and supportive of the “Players” from the very beginning, and thus felt betrayed. (More than just a “favorite player,” Heinsohn was the man to whom Mr. Brown turned for advice in matters of his long-term estate planning.)

From that mid-January Showdown clear through the title-clinching victory over Wilt’s Warriors, whenever Mr. Brown visited his team’s locker room, he’d praise and chat up everyone from the coach down to the ballboys, but cast not a glance in the direction of No. 15.

The frostiness finally melted at the squad’s season-ending break-up dinner, the owner even contritely quipping,“I would like to say a kind word, for a change, about Tom Heinsohn.”

The Brown-Heinsohn feud is but one of a string of internal and/or organizational issues the franchise was facing during its historic and increasingly under-appreciated stretch of Sustained Excellence.

Key reserve Jim Loscutoff was lost in early 1960 to a career-threatening knee injury.

Cousy hung up his high-tops in 1963. Sharman had already taken up coaching, with Heinsohn and KC Jones soon to embark on that path.

The biggest blow to the franchise came mere months after than conciliatory banquet. On Labor Day weekend of 1964, Walter Brown was felled by a massive coronary. Brown’s widow Marjorie and minority partner Lou Pieri (an underappreciated figure in C’s lore) trudged on through the up-coming season before relinquishing the team.

Along with the first of several changes in ownership, the Summer of 1965 bore witness to Red Auerbach’s announcement that he’d coach just one more season. Several months later, the wily old buzzard shocked the basketball world even further by naming Bill Russell to be his successor – right in the middle of the ’66 Finals, to boot.

Comparing teams and players from different eras will always be a frustratingly inexact science. Today’s athletes are bigger, stronger and healthier than ever – Heinsohn played his way to the Hall of Fame while smoking a pack of cigarettes a day – and so too is the business of sport, in all its multi-tiered partnerships.


But Sustained Excellence – be it the ‘60’s C’s or Pop’s 21st Century Spurs – is based on two overlapping premises: put a player in a position where he can be successful, and acquire heady players who bring something to the table. For all their Hall of Fame talent, that Celtic dynasty does not “sustain” without steady contributions from unheralded castoffs like Don Nelson, Emmette Bryant and particularly five-time champion Larry Siegfried.

A from-out-of-nowhere Cinderella story like the ’67 Red Sox or the Knicks of the early 1970’s will always out-glitz even decades of Sustained Excellence.

And through the lens of history, the status of a dynasty can get viewed more as pre-existing condition than accomplishment, the struggle diminished if not dismissed.

While it may lack a bit in “sizzle,” Legendary Greatness is fashioned from sterner stuff, forged out of trial and tribulation – and sometimes out of the clash of strong, stubborn wills.