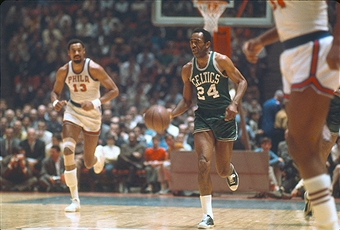 In the spring of 1950 and for the second consecutive year, a 32-year-old Red Auerbach found himself out of work.

The year before when likewise available, Red had been approached by the head honcho of the Providence Steam Rollers. When asked to assess the status of the team – a team whose 12 wins had just doubled its prior season’s total – the blunt Auerbach advised a complete overhaul to the roster that would entail a couple more losing seasons. Already bleeding money, ownership opted to dissolve the franchise, and the feisty coach lasted one season in the employ of Ben Kerner’s then-Black Hawks.

After four losing seasons – on the court and in the ledger – the Boston Celtics were facing the same fate. Believe it or not, the greatest dynasty of them all was about to become a footnote to NBA history no more significant than the Providence Steam Rollers or Anderson Packers.

Bear in mind, the league was established by a group of arena operators looking to make more profitable use of their real estate. And while guys like Ned Irish in New York and our own Walter Brown handled business for the teams, the ultimate power lay in the hands of a corporate board. In the case of the Celtics, that was the Garden-Arena Corporation and they’d voted in 1950 to suspend operations. (They’d considered the option two years before, but held off.)

Mr. Brown, though a hockey guy first and foremost, had developed a soft spot for this game and this team. So, he set about scratching together the assets to purchase the team himself, even taking out a second mortgage on his home.

Out of concern for their long-time (Walter had followed his late father into the promotional business) and beloved colleague, the management execs refused to sign over “title” to the team until a suitable co-investor could be found.

Mr. Brown was already, and for the second time in three years, in the market for a new coach, Doggie Julian having resigned to return to the college game after two disappointing seasons. Hardly a basketball expert (which he freely acknowledged), Mr. Brown called together a group of media guys in an effort to generate a pool of desirable candidates. Roger Barry of the Quincy Patriot Ledger, whose spot on the Garden’s press row was near the visitors’ bench, spoke to the discipline and drive of Red Auerbach’s Washington and Tri-Cities squads, not to mention a resume that contained 20 playoff games, compared to a measly three for the Boston franchise.

As it turned out, the resolution to both issues was a mere 40 miles away – and we’ve already met him in today’s little trip down Memory Lane. 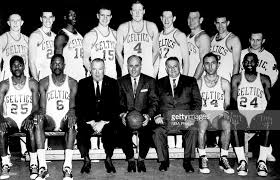 Mr. Pieri, like Walter Brown a hockey guy through and through, shocked Brown with his eagerness to come on board. But Lou Pieri’s instincts told him, just as Walter Brown’s were telling him, that this sport and this league had great potential. The two men were also in agreement that the key to box-office success was a winning team.

In that regard, Mr. Pieri attached one little proviso to his involvement. “Get Red Auerbach as your coach and I’m your partner.”

The rest is history.

A little history was being made exactly half a century ago today as well. On Saturday night, Oct. 29, 1966, Bill Russell suffered the first defeat of his basketball coaching career.

It was at the hands of his chief rival, in front of the largest crowd (11,014) in Philadelphia history, and by the largest margin since Russ had arrived in Boston.

For the second straight game, Coach Russell was without the scoring and smarts of Sam Jones (sidelined with an “ankle infection”), and to make matters worse, Sam’s replacement Larry Siegfried had taken a hard fall two nights earlier during a victory over the Bulls, causing a fair bit of swelling in his elbow.

Bill’s troops hung even for a quarter but the second half, to the delight of the Philly Phaithful, was a full-scale ass-whippin’.

“The guys are embarrassed about that 42 point beating we took in Philadelphia. But they’re not irritated. I guess it’s up to me to get them irritated.” 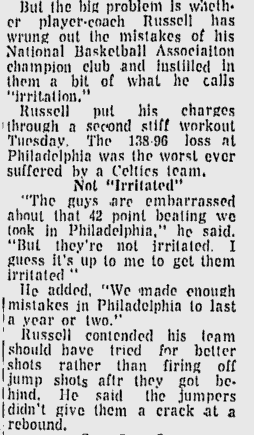 In the early ‘60’s, the NBA’s only trouble on the legal/labor front was the players’ threatened boycott of the 1964 All-Star Game. But by that point, Tom Heinsohn & Assoc. had recruited the advisement of a young Harvard Law School grad named Larry Fleisher.

As the year 1966 was wrapping up Halloween, the National Basketball Association was to experience one final “Trick.” On Thursday Nov. 3 in a US District Court in Pittsburgh, Connie Hawkins filed a $6M lawsuit against the league, “calling out” Commissioner J. Walter Kennedy and naming each individual franchise. Hawk’s claim, quite simply, was that the teams had conspired to “black ball” him for an alleged association with gamblers and game-fixers that had already cost the then-24-year-old playground legend his college career.