Like everyone else in the world, Bill Belichick thinks very highly of Brad Stevens 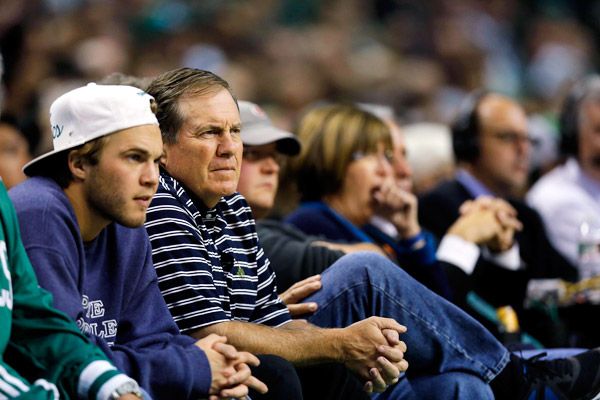 In the last 17 years, Bill Belichick has become one of the gold standards of coaching beyond just New England, and beyond just the NFL. Gregg Popovich is the only candidate I can see for someone being his equal in any of the 4 major sports.

Naturally, in a city as sports-obsessed as Boston, fans and media will always wonder what his opinions are of our current coaches in baseball, hockey, and basketball as well. As you may have been able to guess, it appears Belichick thinks very highly of our current coaching golden boy Brad Stevens, as this piece by ESPN.com's Mike Reiss makes clear.


Belichick: "I’ve gotten to know Brad over the last couple of years [and] I have a tremendous amount of respect for what he has done.” https://t.co/2sIRltsM8K

Now it's not like Belichick would say he didn't like one of our coaches even if that were true, but you can assume he's telling the truth on Stevens. After all, Stevens seems to just be a younger, more polite, and less grumpy version of Belichick. He gives up nothing to the media, will dodge any question that reveals his opinion on anything (nice try Bill Simmons, but you're not quite the Howard Stern or Marc Maron of interviewing), and he is so robotic with the press you almost can't imagine him having a personality. Belichick seems to think that's not all they have in common. Here's another quote from Reiss's piece (nice) below.

"Obviously the sports are different. I don’t know anything about basketball and he doesn’t know much about football, so it’s really not about X’s and O’s and that kind of thing, but you know, more of the other parts of coaching -- preparation, training, teamwork, team-building, confidence, communication, players relationships and so forth," Belichick said. "Obviously, we’re in the same business of taking more people to training camp than we can keep on the roster and then managing a roster and dealing with all of the things that happen during the year with that roster, whether that’s bringing other guys on to the team, trades, and so forth and so on. We’ve chatted about a lot of those things."

There are definitely some parallels between the two guys. Just like Belichick, despite not revealing his personality, we know he has one. Stevens also is 100% dedicated to his craft and is obsessed with winning and improving, and much like the beginning of Belichick's career in New England, doing it with other teams castoffs. There are a lot of similarities between these two coaches, and hopefully Stevens can get to the level of success that Belichick has as well. We already knew it, but it's nice to know C's fans are in good hands. Let's hope Stevens can find his Tom Brady.