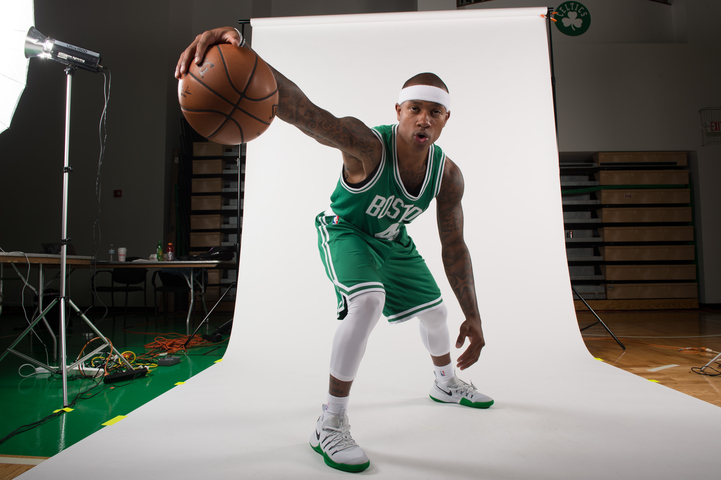 Let’s start off with some trivia:

I am a sports star in New England making changes to my lifestyle in an attempt to play at a higher level for a longer period of time. This includes converting to a healthier diet, eating more veggies, and even going to a sleep doctor at Harvard to learn about getting a good night's rest. My goal is to play until I’m in my 40’s. Who am I?

Okay, I’m sure most of you didn't fall for my trap and say Tom Brady since, y’know, this is a Celtics site. But it sounds just like him, doesn't it? This is actually referring to 5’9” Celtics guard Isaiah Thomas.

Thomas revealed his efforts this offseason to live a healthier life during media day on Monday, and it draws a comparison to our lord and savior himself, Tom Brady. Jay King of MassLive.com found out that along with getting better nights' sleep, IT4 wants even more green in his life:

I got a (personal) chef this summer back home, and I'm eating vegetables for the first time since when my dad used to make me. I eliminated fast food, eating out and things like that. You guys have heard it before -- I want to play until I'm 40, and I know it starts with little things like that. Last week I got in contact with Dr. (Charles Czeisler) over there at Harvard, the 'Sleep Doctor.' I'm trying to learn how to sleep longer and sleep more because that's one thing that other than eating healthier, I don't get a lot of sleep. And that's me. Whether that's watching basketball or just watching TV or playing video games, I have to learn to get more sleep because I know that's going to help me become a better basketball player on the court. The older I get, the more I'm trying to figure those little things out to become a better basketball player, because it's not just all on the court.

I found this as a bit of a surprise. You would think that a professional basketball player, especially one of Thomas’ caliber, would already be on a strict diet that included a surplus of fruits and vegetables. However, it sounds like he hasn't been eating any veggies on a regular basis since his dad forced him to when he was younger.

What that is telling me is that I, and chances are you as well, have been eating more vegetables than an NBA All-Star. That doesn't seem right!

Changing to a healthier diet will be beneficial for Thomas’ long-term career, but may also sharpen his quickness, stamina, and strength this season. Altering his sleeping habits could immediately increase his mental toughness and quicken his decision making on the court.