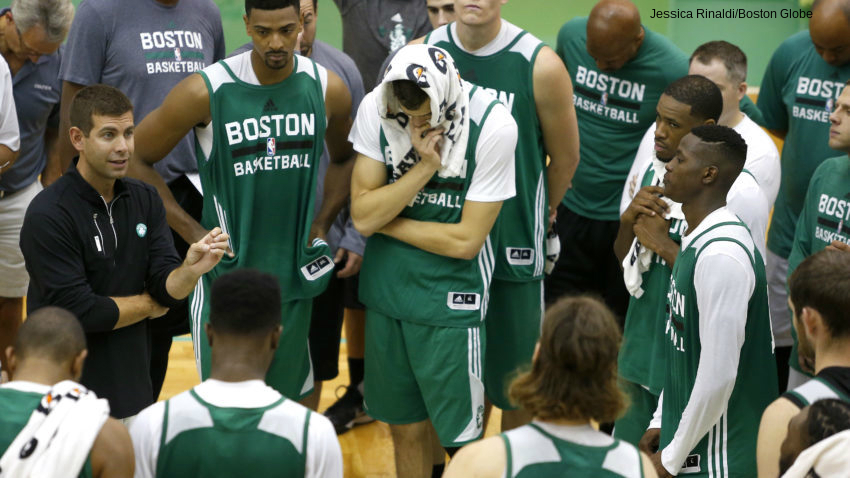 Before the Celtics' first practice of the season, Brad Stevens asked his guys to go at roughly 30-percent capacity while executing a 5-on-5 demo.  Via CSNNE's A. Sherrod Blakely, here's the coach's take on how that panned out:

If that was 30 percent, we’re going to be able to fly around. I think it was just a misjudging of what 30 percent is. They were flying early on in practice. We have to be able to fully rotate, we have to guard different positions, you gotta be able to read the game instinctively and obviously there’s an athletic component that allows you to do so effectively.


Back in July, Stevens stated that one of his priorities was to get the team to "fly around" this season.  He mentioned it again on a recent Bill Simmons podcast, then also used the phrase last week while discussing what Al Horford can bring to his squad.  And now, it's one of Stevens' first comments from the opening day of training camp.

"Fly-around" lineups are essential with the new the direction the NBA is heading, as illustrated by this outstanding Ringer video on how to defend the Golden State Warriors (something Stevens has already proven to be quite good at):


I made a video about defending the Warriors' Lineup of Death with the help of the great @KevinOConnorNBA. pic.twitter.com/rBETAFmjr9
— Jason Gallagher (@jga41agher) September 27, 2016


While the Celtics starting five may not be able to do this particularly well (Isaiah Thomas and Amir Johnson are fairly one-dimensional defensively), there are some highly intriguing bench options available at Stevens' disposal, beginning with the versatility of rookie Jaylen Brown:


#Celtics Brad Stevens again said value of rookie Jaylen Brown is that he should be able to guard a number of different positions in #NBA.
— Scott Souza (@Scott_Souza) September 28, 2016


Imagine the switching possibilties with Marcus Smart, Avery Bradley, Jae Crowder, Brown and Horford on the floor together?  Or, if Stevens really wanted to get nuts, how about swapping Terry Rozier in for Horford?  The "fly-around" capabilities of a Rozier-Bradley-Smart-Crowder-Brown lineup are tantalizing.


RELATED: The Celtics' 'lineup of death' and how it might work