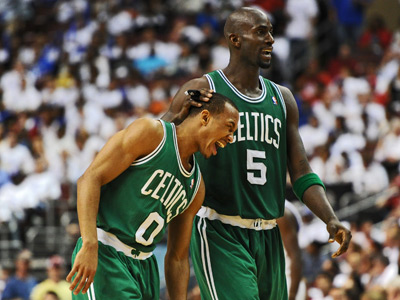 There aren't many off-seasons where you have 3 First Ballot Hall of Fame players decide to hang it up. The NBA without Kobe Bryant, Tim Duncan, and Kevin Garnett "going to war" like they have for the past two decades is difficult to fathom. Garnett was the most recent to announce his retirement, and of the three retirees left the biggest impression on Celtics fans for obvious reasons. The 2008 Defensive Player of the Year and World Champion left an impact on fans and players alike through his professionalism, intensity, and work ethic. Former teammate Avery Bradley clearly felt a deep connection to KG and even wrote him a letter upon hearing about his decision. Bradley discussed how special he was to him at Celtics Media Day on Monday. Via Masslive's Jay King:

"It hasn't just been on the court," Bradley said Monday at Celtics media day. "It's been off the court as well. Kevin is just an amazing person. He doesn't give a lot of people a chance to get to know him very well, but he's just an amazing guy. His family is lucky to have him. I'm lucky to have had a chance to be his teammate and learn from him on and off the court. He's such a professional. He does everything right on the court and off the court. He never disrespected Doc (Rivers). I mean, I could go down a list of how amazing KG was as a teammate, and he always had everyone's back on the team. He was so passionate about this game and the NBA's going to miss him."

Bradley's thoughts are those from a very long list of ex-teammates who have all had similar things to say. The Big Ticket was the ultimate example of the old cliché of "the player you love to play with and hate to play against". Players like Charlie Villanueva and Carmelo Anthony may not have quite as much respect, for example. It's a shame not all of his opponents could be as savvy as Steven Adams.