What the Hell Happened to...Nate Driggers?


"I can always show my son my Boston Celtics jersey that shows, no matter if I never make it back again, I did it. I lived out my dream and not too many people can say that.." - Nate Driggers before hitting the court to practice with the American Basketball Association's Calgary Drillers, December 11, 2004


After attending Corliss HS and growing up in Chicago, Nate would become the only future NBA player from the University of Montevallo.  He signed as an undrafted rookie with the Celtics at 23 in 1996.  Like most WTHHT players, he wasn't on basketball's brightest stage long enough to be remembered by most.  Just the one campaign with Boston.  He scored 36 points in 15 games that year.  Yet he proudly remembered his time with the team:

"It gives you chills because when they'd turn on the giant scoreclock TV screen and you'd see (Larry) Bird and (Kevin) McHale and all those guys.  They have such a great tradition, different than any place you've ever been. That persona there is something you just have to experience. Everything was there."


Following the 1996-97 NBA season through 2004, Driggers played in Poland, France, Australia, Mexico and Canada.  In 2004 he gave it a shot in the ABA with the Calgary Drillers.  In 2005 he signed with the Utah Snowbears of the ABA.

At the time Nate claimed to be financially stable:


"One thing about it, financially I'm OK.  I did the right things with my money. My family, my kids are OK and I have a stable life. Along with the nice money I made overseas and some investments that turned out good, it worked out for me."


But that doesn't seem to have been the case.

Before expounding on what has transpired since, we must admit: we usually have pictures.  Lots and lots of pictures.  Especially for guys who played just a couple decades ago.  Yet this time is remarkably different.  As of writing this, there were no known pictures of Nate Driggers in a Celtics' uniform.  Until now.  Here it is again:

That's Nate running down court, with Brett Szabo trailing the play.  Here's where that picture comes from: 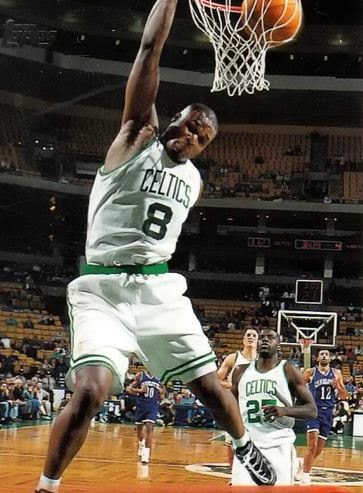 Look at those stands.  For sure getting blown out again this time vs Charlotte.  It's incredible seeing that picture and knowing that just ten years prior to it the Celtics were in the Finals battling the Lakers.  Celtics Pride had never experienced that type of drought of titles.

How is it that that's the only picture?  Well it wasn't.  There's also this:

Does that even count?

As far as what's been up with Nate, it hasn't been all peachy for upon leaving the bright lights of professional basketball.  He pleaded guilty to marijuana charges in 2001 and was sentenced to four years in prison by Cook County Criminal Court Judge Thomas Davy.  As he said himself "I had some indiscretions in my life that took me away from the game."

Back in 2009, Driggers was arrested for selling counterfeit Air Jordans at a Far South Side shop in Chicago at the Halsted Indoor Mall.  He was selling the sneakers for $35 while the original ones cost $150.  Ten pounds of marijuana was also seized.  He received a fine and 12 months conditional release for this.


And the most recent news, in September of 2015, Driggers was arrested again, this time for illegally possessing a firearm.  Up to 29 firearms.  Apparently Driggers is known as a "fence" (an individual who knowingly buys stolen property for later resale) and spent $8,000 on the illegal weapons.  I imagine that went something like this guy dealing with Breaking Bad / Better Call Saul's Mike Ehrmantraut:

Wasn't sure if there'd be a time to tie either show into WTHHT, but now's as good as ever.

While CelticsLife praises Nate's fond recollection of playing for the Celtics, we also recommend not crossing paths with him.  Nate should try and meet up with former Celtic (and Chicagoan) Tony Harris or former Celtic (and Chicagoan) Thomas Hamilton.  Collectively I'd think something good could come of them collaborating, at least much better than serving as a fence.

Cedric Maxwell once said about Nate "Grave" Driggers, "He's not a basketball player, he's a boxer.  He's playing the wrong sport."  Hopefully Nate is able to turn his life around positively.