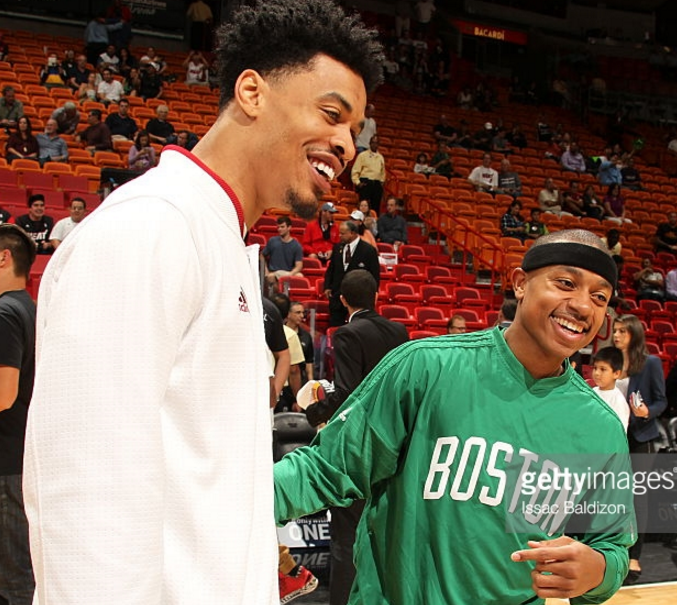 Isaiah Thomas recently hosted a youth basketball camp in Reading, MA.  In addition to swatting kids' jumpers into the stands, Thomas took some time out to speak to the media.  He's clearly pleased with the direction the Celtics are heading, and in particular Boston's large number of national TV appearances in 2016-17.

The NBA knows we're going to be pretty good. Teams know. Everywhere I go, everybody's excited about the Boston Celtics and we're just going to try to take steps forward and continue to work. And I know Brad [Stevens] and the coaching staff are doing everything they can to put us in position to be successful. So we've got to bring it come October.

The NBA's excited. Boston's almost back. We go to 22 national TV games (after playing seven last season). That means something. That says a lot, especially when you're on national TV and the NBA puts you on there. We're excited about it. I'm excited about the opportunity to put a smile on more people's faces around the world.


When the schedule was first released, my immediate reaction to all the national televised games was the same as Isaiah's--the Celtics are back.

The C's point guard also spoke very highly about the pair of free-agent signings made by Danny Ainge this summer:

We got a big addition in Al Horford. Got my guy Gerald Green coming back to Boston.

A guy like Gerald Green, he can guard multiple positions, he can shoot the ball, and he's a high-flyer. We need something like that. Then Al Horford is self-explanatory. We know what [Horford is] going to bring. He's very versatile. Guys [have] been working. Guys got a chip on their shoulder. We feel like we didn't go as far as we wanted to last season, so guys are going to be ready. A lot of guys are working hard and ready for this opportunity this season.


Green, a former teammate of Thomas in Phoenix, could be a key contributor off Boston's bench.  I tabbed him as the most likely "overachiever" on the squad for ESPN.com's Celtics Summer Forecast:

Green will enter training camp battling for a roster spot, but he's the kind of reclamation project who can excel under [Brad] Stevens -- just ask [Jordan] Crawford and [Evan] Turner. My guess is Stevens' natural tendency to fight tooth and nail for every victory might lead him to give consistent minutes to the veteran Green rather than young guys like [Terry] Rozier or [Jaylen] Brown.


Along with Brown, Green was the top choice for "overachiever" among the panel of local writers/bloggers.