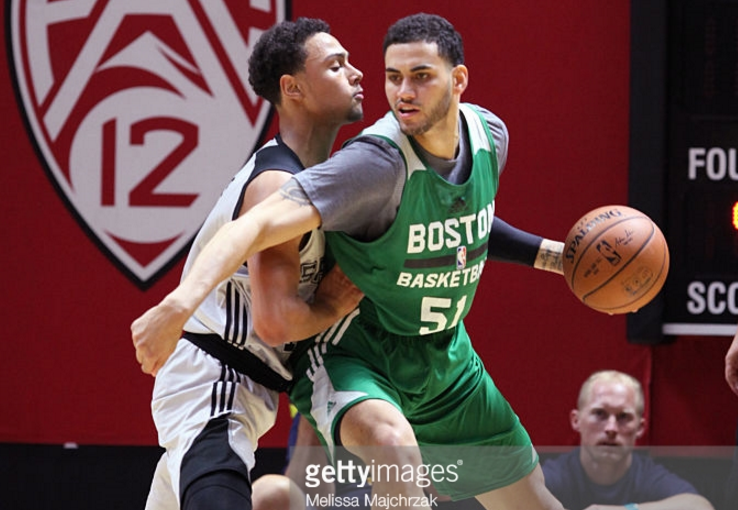 Back on draft night, it was reported that 58th pick Abdel Nader had agreed to go directly to the D-League.  Like most Celtics fans, I didn't give it a second though.  But, then Nader went out and surprised us all in summer league--he was Boston's second leading scorer (in terms of total points) in Las Vegas and was arguably the C's third-best player overall behind Terry Rozier and Jaylen Brown.

Now it appears Nader may be rethinking his willingness to be a "domestic draft and stash" and sign directly with the Maine Red Claws.  Via the Boston Globe's Adam Himmelsbach, Nader's agent, Cervando Tejada, said the following:

He's an NBA player, that's my belief. Right now, we have to decide what the next move is.

Boston gave Abdel an opportunity by drafting him, and it was a big opportunity. They gave him a chance and have done good by him. It's not that Abdel is averse to going to the D-League. It's just tough because he had such a good summer.


Why is this an issue for the Celtics?  Himmelsbach writes:

To retain a second-round pick’s rights, teams must extend a required tender by Sept. 10. That is typically a one-year, nonguaranteed contract offer for the rookie minimum salary. Many teams have good-faith agreements with second-round picks that the player will not accept the tender, because if it is accepted, it can force a team’s hand a bit.


The assumption (or verbal agreement, as Himmelsbach says several league sources reported) was that Nader would reject the tender and sign with Maine instead, allowing Boston to keep his draft rights.

Basically, there are three possibilities on the table:

1. The C's could decide not offer Nader a contract, allowing him to become a free agent.

2. He could reject the contract and take a D-League deal instead, as originally expected.

3. Nader could accept the tender and go to training camp.

Option 3 is where things get dicey.  The Celtics already have 18 players under contract for 2016-17.  If Nader goes to training camp and doesn't make the 15-man roster (a very likely scenario), he'll become a free agent.  He could still be assigned to Maine, but other NBA teams would have the option to sign him out of the D-League.

Boston can only maintain Nader's draft rights if he rejects the tender or lands on the 15-man roster.

From Nader's point of view, it's in his best interest to accept it since his worst-case scenario would still be the D-League.  However, chances are the Celtics wouldn't have selected Nader in the first place without his promise to reject the tender.  The C's were well aware of their roster crunch and overabundance of draft picks and would've simply moved on to the next player on their list who was willing to be stashed.