Should the Celtics look to extend Kelly Olynyk's contract? 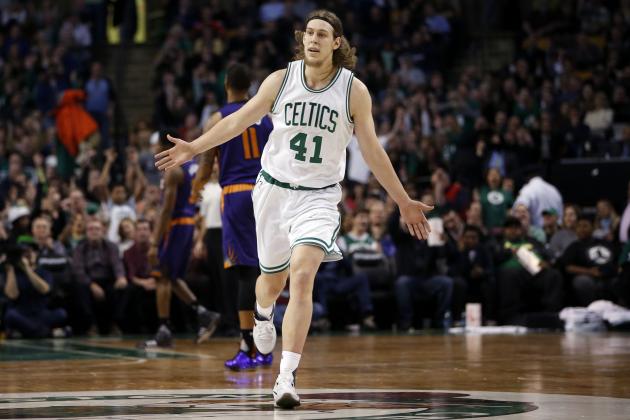 Prior to his shoulder injury on February 10th against the LA Clippers, Kelly Olynyk had shown great improvement from his first two NBA campaigns, particularly from the 3 point line (41.3%). Olynyk struggled to get back into game shape following the injury and turned out needing offseason surgery as a result. But let's face it, a 40% 3-point shooter is a hot commodity in today's NBA. You add the fact that the player happens to be 7-feet and things get really interesting. If he continues his pace from last year, there will be a lot of NBA GM's taking interest in the 2017 restricted free-agent. When asked about free-agency and contract extensions, Olynyk didn't seem too concerned via ESPN's Chris Forsberg:

Let's also consider the other side of the argument. The Canadian center still has some glaring weaknesses. As a big man he is a below average rebounder and defender with limited playmaking ability. However, on this Celtics team, as constructed, he is a perfect fit. Boston desperately needs shooting. And they have plenty of strong defenders and ball-handlers who can make up for Olynyk's deficiencies. If he takes another leap in his fourth year and improves in any of these areas, his price tag will be significantly higher than it will be before the Halloween contract extension deadline. But if he completely falls apart and loses all interest in basketball, at least he has another sport to fall back on.

Back to the glory days with @KellyOlynyk and the boys pic.twitter.com/d1iiqYgSlq