Celtics fans, get your 25-year-old Dee Brown jersey out of the attic and put it back in the rotation

Dee Brown was easily my favorite NBA player 25 years ago.  I was in 8th grade and Brown was a relatively anonymous rookie who came out of nowhere to win the slam dunk contest.  Now the Celtics have another rookie named Brown, and he's going to wear Dee's old number.

Jaylen Brown took No. 9 in summer league (possibly as a tribute to Rajon Rondo?), but at the time Jared Sullinger was still a member of the Celtics in possession of No. 7.  When Sully became a Raptor, seven became available.  After Jaylen snatched up No. 7, Demetrius Jackson grabbed No. 9:


Been confirmed. Jaylen Brown is officially No. 7 (wonder if any No. 9 jerseys were sold) & Demetrius Jackson switched from 26 to 9. #Celtics
— gary washburn (@GwashburnGlobe) August 7, 2016


The pair of recent draft picks put their new numbers on display at the NBA's rookie photo shoot (here's the complete photo gallery):


Clearly aware that he's not the first Celtic named Brown to don No. 7, Jaylen paid homage to Dee by posing for a recreation of the famous no-look dunk: 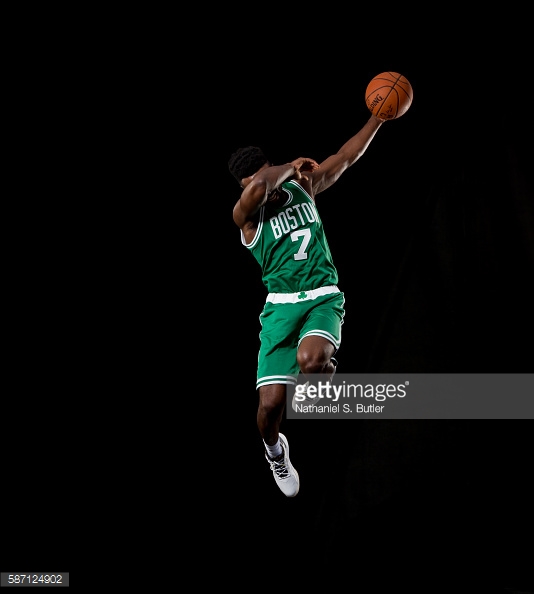