How bad will the Nets be next season? Really, really bad 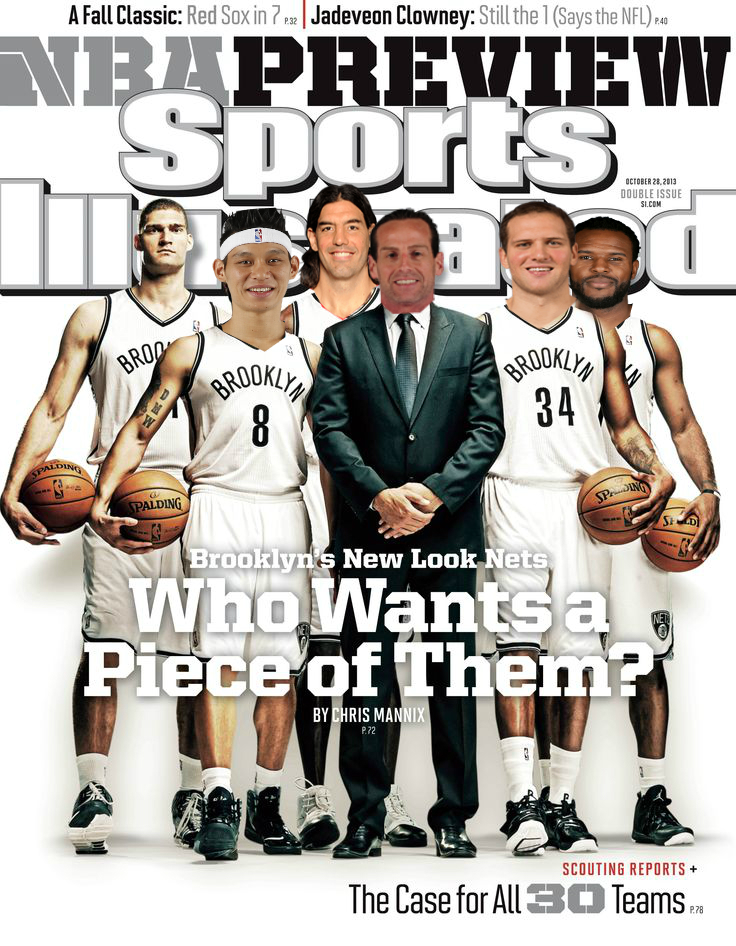 It feels like it was just yesterday that Danny Ainge pulled the trigger on the most shocking trade of the 2013 NBA Draft. We were all blown away by the deal and, to be perfectly honest, a little confused. Some critics hated the trade for the Celtics, not knowing what the worth of those three unprotected first round picks would be from Brooklyn.

Hell, even Bill Simmons hated the trade at the time.

After that glorious trade that sent Paul Pierce, Kevin Garnett and Jason Terry to the Nets, nobody wanted a piece of them and for good reason. The now-infamous Sports Illustrated cover is a perfect representation of that.

And as of today, nobody really wants a piece of them either. Well, free agents sure don’t anyway.

I’m not here to rub salt in the wound of Billy King’s tenure as General Manager...oh wait...no I totally am! His shortsightedness allowed the Celtics to rebuild at an alarming rate while taking away the future of the Nets. It’s the gift that keeps on giving.

Let's make one thing abundantly clear: the Nets are going to be really bad in next season.

After trading away Thaddeus Young to the Indiana Pacers for a first round pick in this year’s draft which turned out to be Caris LeVert, it became clear that the Nets resigned themselves to another poor season.

Brooklyn swung and missed out on its free agent targets. They couldn’t get a meeting with Kevin Durant despite Jay Z’s pleas to bring him on board, nor could they even seal the deal on poison pill deals with Tyler Johnson and Allen Crabbe.

Johnson and Crabbe wouldn’t have brought this team out of the slums that is the bottom of the Eastern Conference, but they would've at least injected some youth and hope into the franchise. But alas, this is the Nets we are talking about. They are hopeless, just like their current depth chart heading into next season.

Currently, this is what the Nets team will look like on the court next season:

And with the first pick of the 2017 NBA Draft, the Boston Celtics select…

That starting five would lose in a pickup game at a park against guys who just worked a 9-5 shift at the mall. I’m actually convinced that Duke University’s team next season would wipe the floor against the Nets, too. Brooklyn’s best player is Lopez who is injury-prone and inconsistent, a borderline All-Star caliber player if his feet don’t give out on him.

Jeremy Lin is back in New York (hooray) but his lack of defense will be exposed with no real interior defense to cover him. Besides Lopez, the only other bright spot is a second-year player by the name of Hollis-Jefferson, who couldn’t make three baskets in a row on an arcade machine. In other words, he’s a terrible shooter.

Scola was just signed to a one year deal according to ESPN’s Mike Mazzeo, but he’s 36 years old and is a liability in every facet of the game besides mid-range shooting.

The Nets will be the worst team in the NBA next season, barring unforeseen injuries to other bottom-dweller teams such as the Philadelphia 76ers, Los Angeles Lakers and New Orleans Pelicans. But hey, at least each of those teams have great talent and assets to turn their fortune around.

It is important to keep in mind that the Nets won’t be the worst team in the NBA just because their team isn’t very good; every other team in the East got a lot better too.

The Pacers improved as did the Pistons, the Knicks and Bulls might actually be playoffs team again, the Hornets did their best to keep their core and will have Michael Kidd-Gilchrist back in the fold next season, the 76ers could actually be really interesting to watch, and the list goes on, and on.

The Nets have no motivation to win or lose games next season. Boston has the right to swap picks (which they absolutely will) in next year’s draft which should be another top-three selection at the very least.

With each loss, the Celtics pick-swap becomes more and more valuable. Ainge could use that pick as leverage in a blockbuster trade, or simply hold onto it and draft a Jayson Tatum or Harry Giles next summer.

Every Nets loss next season is a Celtic win and next offseason will be just as exciting for Celtics fans as it will be for Nets fans, if there are any fans left aboard.

On a sidenote, shoutout to our very own Matt Richissin for the Photoshop. It's a masterpiece.