The Boston Celtics cap situation: What it means for this summer and next 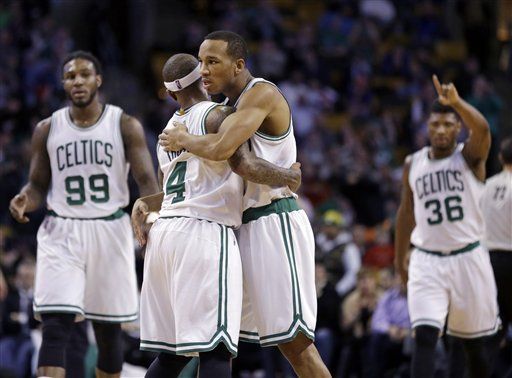 Numbers. They sure are boring, right? < End of column >

If only. Unfortunately, being a fan of the Celtics means having to be way, way too familiar with the teams salary cap situation, and the weirdness that often comes with the CBA. The purpose of this post will be to lay out the current salary cap situation and spell what that means for the teams' future over the next two years in a simple, easy to follow manner.

That's the purpose. Whether I'll be able to execute on this remains to be seen. Let's start with a snapshot of the team's current salary:

And here is the figures for 'max contracts,' on the left is years in the league

You know this. You've seen this, like, everywhere. The Celtics will need to create roughly 56 million dollars in cap space to sign two maximum free agents (with less than 10 years experience), and they can do so pretty easily by declining the options on Amir Johnson & Jonas Jerebko and rescinding the bird-rights on Jared Sullinger & Tyler Zeller.

One quick point of clarity: The Celtics will need to make a decision on Amir & Jonas' options one day before free agency starts.

They'll mostly likely pick up both players' option, and look to trade them if need be. With the amount of money that's out there, it should be relatively easy to find these guys a new home - but if it came to it, the Celtics could certainly incentivize teams to take them on with a pick.

The Celtics have Isaiah Thomas, Avery Bradley, Jae Crowder, Jaylen Brown and Marcus Smart under contract through 2018 for less than 31 million dollars

Leaving up to 77 million dollars in cap space for the following season. That number decreases - albeit at a pretty affordable rate - if they were to exercise the options on Rozier, Mickey, Hunter and Young.

The Celtics could sign one max free agent this summer, and still be a major player the following season

If they swing for the fences and miss, spending on a tier-2 free agent (with 6 or less years of service) and still be able to afford two max free agents. Getting a player with more years of experience would make this more challenging. 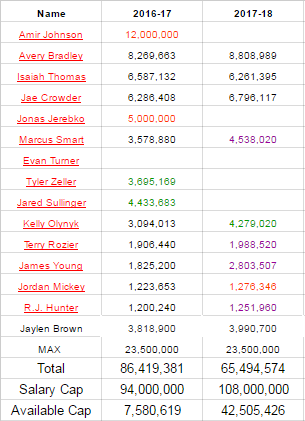 Under this scenario, the Celtics would have 42 million dollars in available cap and could create up to 17 million dollars more by declining players' options (though it's hard to see them not exercising Marcus Smart's option at the absolute least).

If they miss on the top stars, the Celtics should try to commit no more than 13-15 million dollars in future cap

I think this is why you won't see names like Batum & Parsons too frequently. The Celtics best chance might be next offseason, and keeping the flexibility to be able to acquire two max free agents without shipping out parts is in their best interest.

So, basically go to this list -and scroll down to about 30.