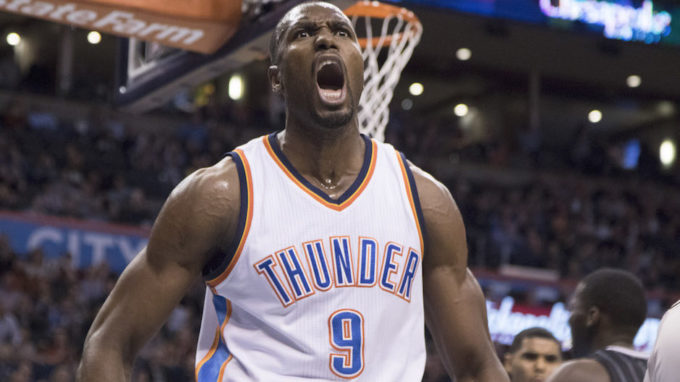 After the Thunder fell to the Golden State Warriors, there was a brief moment of hope for Celtics fans, where optimism and fandom out shined logic. A battle between the head and the heart that had most fans saying "Probably not, but maybe..." But with time, most Celtics fans have probably came to the same conclusion this morning: Kevin Durant isn't coming to Boston.

We're always in a rush to say windows are closing in the NBA. Kevin Durant's window with the Oklahoma City Thunder isn't. Leaving Oklahoma City would mean leaving a team that already has another top 5 player, a promising young center, and an elite shot blocking big. Leaving the Thunder means leaving a team that just dismantled the sixth winningest regular season team of all time, and took the winningest team of all time to seven games despite having to rely on heavily flawed players to play meaningful minutes. The Thunder don't need to blow it up, they need to tinker.

Which brings us to our trade...

In a lot of ways Serge Ibaka exemplifies the Oklahoma City Thunder - The sizzles so far removed from the steak that we tend to overlook what he does well. No, he's not a dominating superstar. He is an elite shot blocker who is capable of playing both the 4 & 5 positions, who just shot better than 44% from 3 point land on nearly 4 attempts a game in the playoffs. Adding Ibaka would give the Celtics a level of rim protection they've been lacking for years without sacrificing offensive spacing.

That's a super unique skill set, and that shouldn't be forgotten. And it becomes no more evident than when you start to consider his impact on what the Celtics could do with the #3 pick. Ibaka can either be the guy who clears some of the logjam at the 2 spot to allow this team to pick either Hield or Murray, or he's the defensive pairing you want next to Bender (and that should provide enough shooting to let this team start Marcus Smart).

For the Thunder, this trade is about making basketball and business sense.

On the basketball side, this is about roster balancing and being able to match up against the best in the west better. This team's unquestionably at it's best when Durant can play the 4. But him logging minutes at the power forward means that two of the Thunder's three talented big men have to be on the bench, and two of their heavily flawed wings need to be on the court.

For all that Avery Bradley isn't, he's damn-near perfect for what the Thunder need: A knockdown shooter who doesn't need the ball in his hands in order to be effective, and an elite perimeter defender who could team up with Russell Wesbtrook to give opposing back courts nightmares. And since players like Steph Curry, Klay Thompson and James Harden won't be going anywhere soon - that's a very good thing for OKC. Because of his height, Bradley might not be a more overall valuable player than Ibaka. But for the Thunder, it'd seem like Bradley's the better fit.

From the business side, Ibaka is due a fairly substantial pay increase after this season. And unfortunately for the Thunder, it comes during the same summer that Russell Westbrook and Steven Adams will become free agents (Westbrook unrestricted, Adams restricted). Bradley's bargain bin deal could not only help them avoid the tax, but also provide them the flexibility to acquire a few more pieces to compete.