Can Celtics have their cake and eat it too by trading down from No. 3 pick? 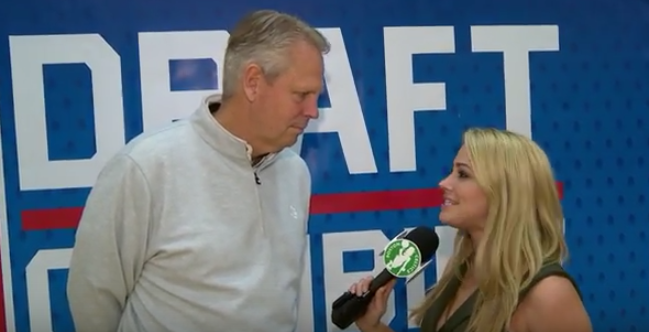 The most popular debate throughout Celtics Nation right now is whether or not Boston should trade the No. 3 pick in the draft and try to get significantly better right now, or use it and keep building for the future.  What if the C's can do both?

Before the lottery took place, I spent some time playing Chad Ford's ESPN mock draft lotto simulator.  Per Ford's mock, when the Celtics landed in the third spot, they always took Jamal Murray.  However, Boston was also able to select Murray each time at fourth and fifth.  If this were the case, why not trade down from No. 3 to No. 5 if you can still get the player you want there?

Who know's if Murray is actually Danny Ainge's guy or not, but the premise is still sound.  In a recent podcast on The Vertical, Yahoo Sports' Adrian Wojnarowski said the following (via Jay King of Mass Live):

There will be a lot of teams trying to get to 3. I think a lot of teams view, after the top two, a lot of players differently. Whether it's Kris Dunn, Dragan Bender, that group of players will (have) appeal, so someone's going to try to move up and get there. Will there be a package rich enough for the Celtics to want to move out of there? And does Danny Ainge see a difference-maker in that spot that he wants to take? But certainly Danny Ainge is always open for business in Boston with deals. They have multiple picks. I think they'll be very active in the trade market.


Hypothetically, let's say Buddy Hield is who Ainge is most interested in (NBAdraft.net has him going to Boston at No. 3).  In DraftExpress' most recent mock, Hield is still on the table for Denver at No. 7.  If the Nuggets covet Murray, Kris Dunn, Jaylen Brown or Dragan Bender, what might they be willing part with in order to move up to third?  Off the top of my head, how about Kenneth Faried?

Maybe the Pelicans expect to move on from Jrue Holiday (who is a free agent next year) and want Dunn to be their cornerstone point guard alongside Anthony Davis.  Would New Orleans deal away a couple future draft picks in order to pick third instead of sixth?

Or, what if the Suns are enamored with Bender?  Could Ainge pry T.J. Warren away from Phoenix in exchange for swapping No. 3 and No. 4?

These are just a few quick thoughts--but depending on which prospect Ainge likes best, the opportunity is definitely there to draft his guy and get something else for free.