The Celtics broke the Warriors (twice) 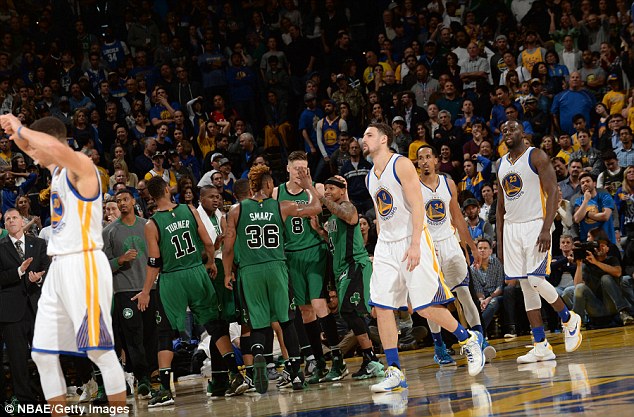 On Friday, December 11, the defending-champion Golden State Warriors stormed into Boston with a 23-0 record.  That evening, the Celtics held Stephen Curry to one of the worst shooting nights of his career (9-for-27) and went toe-to-toe with the Warriors for 58 minutes before succumbing 124-119 in double overtime.

Boston served up a battered and run-down Golden State ballclub for the Bucks to feast on in Milwaukee the next night:


Twenty-four hours later, the mighty Warriors were no longer undefeated after falling to the Bucks 108-95.

However, Golden State remained perfect at home through December, January, February and March.  In that time, the Warriors rolled to 36-0 (for an NBA-record 54 straight games dating back to January 27, 2015) in their own arena.


On April 1, Boston enacted its revenge and shocked Golden State at Oracle Arena, ending the Warriors' bid for a perfect home season.

Four days later, the champs were knocked off in their own building again--a 124-117 OT defeat at the hands of a 25-52 Minnesota Timberwolves squad.


I'm failing to see GSW make the type of improvements necessary to beat the Celtics in the Finals
— Guitar Man (@HebertofNH) April 6, 2016


Celtics-Warriors will start on ESPN2

Celtics are only team Warriors haven't beaten by more than 5 points in the last 2 seasons
— ESPN Stats & Info (@ESPNStatsInfo) April 2, 2016


This unprecedented success vs. the reigning MVP isn't new for Brad Stevens.  As the coach at Butler, Stevens' Bulldogs held Curry to a 6-for-23 shooting night in a 75-63 victory over the Davidson Wildcats in 2009.