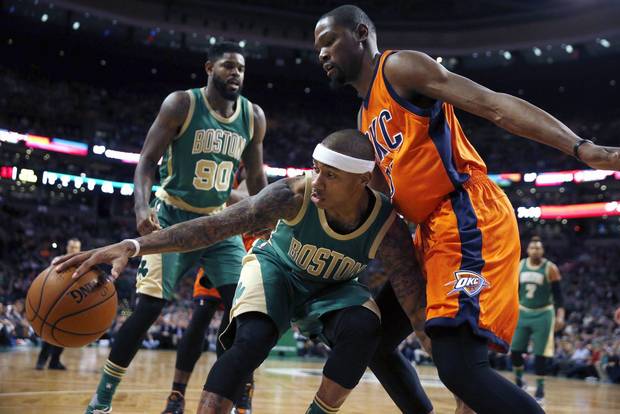 The rampant speculation around the Boston media -- both on the positive and negative end -- on whether the Celtics have a chance at plucking Kevin Durant from his cozy (we use the term loosely) confines of his Oklahoma City home has been well documented. But as the fervor grows at home, some of the sparks may have caught kindling around the country.

Sports Illustrated's Andrew Sharp (formerly of Bill Simmons' Grantland) recently ran down the teams with the best chance at nabbing Durant, and he has plenty of praise for the pitch the Celtics can make to the former MVP:


He'd be in the East, he would be going to team with as rich of a history as anywhere in the league, and he'd probably average 35-a-game playing in that offense. From a marketing standpoint, it would put him on an even bigger platform than he's had in Oklahoma City. From a basketball standpoint, it would allow him the best chance (outside of OKC) to max out his ability.


Now before we go too far with Sharp's analysis, bear in mind that while the 15% chance he gives the Celtics is one of the highest but is substantially lower than the 35% chance given to OKC or even the 20% chance he gave the Lakers. And, at the risk of giving my readers an unnecessary statistics lesson, we should also remember that even that 15% chance means there is an 85% chance it doesn't happen.

Despite the realism of pursuing a player literally every team in the league would do anything in its power to acquire, however, the fact that the chance is non-zero would have been unbelievable even at the all-star break. Obviously the Celtics' talent base plays a huge role in moving the needle, but Implicit in the growing recognition that Boston can make a play for a superstar like Durant (or even an Al Horford-Durant combo platter) are a few smaller but still vital pieces of information that, it seems, NBA thinkers are now taking as fact when it comes to the Celtics. Let's count them off:

1) Isaiah Thomas is good enough to attract another star

Last summer, even after stunningly making the playoffs, detractors pointed to the old adage that great recognizes great -- or, put more frankly, that the lack of star power in Boston meant no stars would want to go there. However, in recent discussions of the possibility of landing max-level players such as Durant, this concern has been voiced less and less. Chris Broussard named him the 14th best player in the league in his latest player ratings, and if that opinion is permeating the national landscape Isaiah could be in line for a third team all-NBA nod. With Thomas going on a scoring binge in March, earning his first all-star berth, and leading the Green to a likely top 4 playoff seed, Thomas is no longer a liability in recruiting as the team's best player -- he's an asset.

2) The treasure trove of picks actually means something

Perhaps the second most common take against the Celtics' ability to land a star has been that the bulk of their rebuilding effort is in draft cachet -- picks that could be used to draft stars or trade for established players, but will seem worthless to a prospective free agent until they materialize into one of the two. Sharp's piece shows that this view, in combination with the talent level on the team, has actually reversed course; now that players have seen what the Celtics are capable of, the virtual guarantee of adding talent -- veteran or youth -- over multiple years through the Celtics hoard becomes enticing rather than off putting.

3) Markets aren't what they used to be

Boston is by no means a small market -- just look at the Red Sox payroll or the Celtics luxury tax bill during the Big Three era -- but it's utility as an area where a star can grow his personal brand is certainly an open question. Famous free agents such as Shaquille O'Neal, Lebron James, and Tracy MacGrady, all transformative talents at the time, made their decisions at least partially on the ability of their destination to raise their national profile. And while Durant has been wildly successful -- including a new shoe deal that might reach 400 million dollars -- while toiling in the smallest market in the league, it's hard to know how much that stuff matters to him now that he can choose his destination (especially with Stephen Curry dominating the league media-wise in ways we've never seen before). There may even be a subplot, as Sharp mentions, of Nike steering Durant towards certain destinations to try and counteract the huge boost Curry has given Under Armor. But all of this logic is working on an obsolete model, and Sharp's declaration of the chances the C's have at Durant shows that. Social media and packed national TV schedules have made it easier and easier for players to grow a brand outside basketball - and take their brand with them to a new team. Lebron did it in Miami, a city with myriad advantages but objectively "smaller" than Boston as a market -- and people are realizing that a transcendent talent like Durant could do it just abut anywhere, too.

So, even though even the man who calls his ideas on Durant's free agency "conspiracy theories" gives them only a 15% chance to nab him, that is not the number Celtics fans should be worried about. The number fans in beantown should remember is 100% -- the chances that, Durant or no Durant, the Celtics will be bringing in an impact talent in the near future.

Photo Courtesy of the Associated Press via Masslive.com