Celtics fall to Hawks 104-92, get eliminated from playoffs 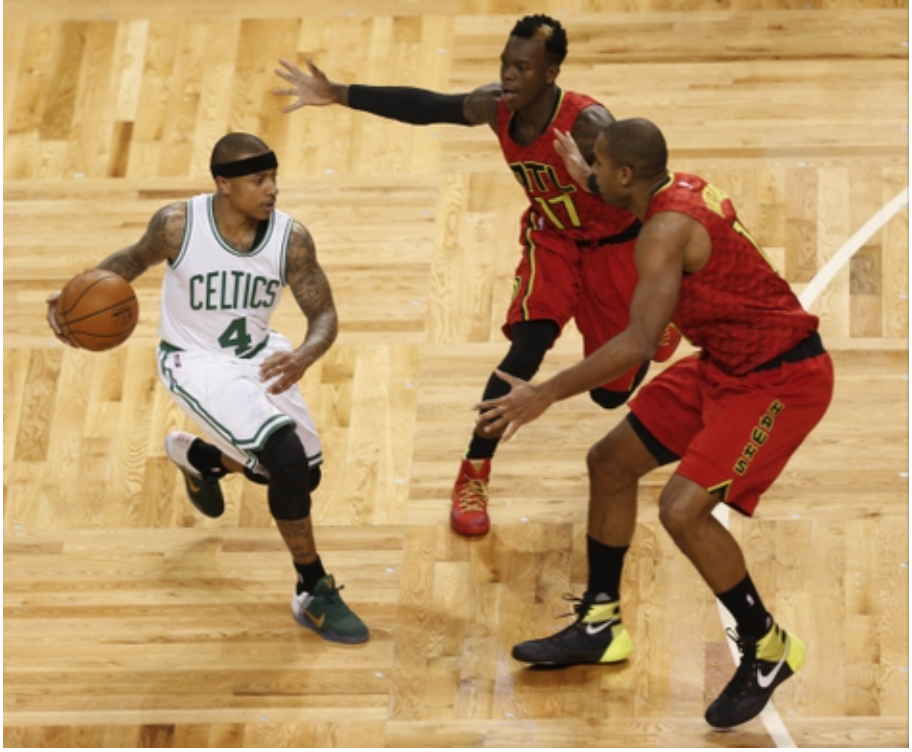 After another, lets say, less than stellar shooting night, the Boston Celtics lost to the Atlanta Hawks 104-92 and were eliminated from the 2016 NBA Playoffs. Much like the previous three losses in the series, the Atlanta defense stifled the C's offense and Boston did no favors for themselves with their shooting performance. Despite making some noise in the fourth quarter, the C's offense was borderline unwatchable for much of the game. Too much quality passing from the Hawks led to too many open looks and Boston couldn't catch up.

After hearing Thomas call for his teammates to step up after the Game 6 blowout loss, Jonas Jerebko and Evan Turner answered that call in the early moments of the first quarter. Jerebko and Turner combined for the first nine Boston points. Neither team was shooting well to open the game, but the Celtics were playing quality defense and caused four Atlanta turnovers in the opening five and a half minutes.

After the Celtics took an early 9-5 lead, the Hawks answered with an 8-0 run to take a 13-9 lead. The Atlanta defense was suffocating any time the C's got into the paint. In the first eight minutes of the game, the Hawks had already racked up five blocks. Any time a Boston player got into the paint he was immediately swarmed by two or three defenders. The C's weren't helping themselves out either, making just four of their first 19 shots.

Despite the horrible shooting, back-to-back three-point shots from Jerebko and Thomas cut the Atlanta lead to 20-17. Jerebko led the way early on for the struggling C's with eight points and two blocks.

The Hawks started the second quarter on a 14-4 run to open up and 13-point lead. The Celtics continued to miss shots and were stumped by the Hawks' chaotic defensive intensity. Atlanta was able to move the ball and get a lot of easy looks early in the second. They had 10 assists on their first 14 made baskets.

After the building had gone quiet for much of the second quarter, the fans got a little energy when Crowder threw down a fast-break dunk over two Hawks defenders. The C's showed some signs of life, but were not able to drastically cut into the Atlanta lead. While not shooting well from the field, Thomas was getting his teammates involved with five assists in the first half. After trailing by just three points after the first quarter, the C's went into the halftime break down 41-33. The Celtics shot 27.7 percent in the first half and just 17.6 percent from beyond the arc.

The Hawks, much like at the beginning of the second quarter, started the second half on a 14-3 run. Crowder picked up his fourth foul under a minute into the half and Brad Stevens went to a much larger unit with Kelly Olynyk, Jerebko, and Amir Johnson along the frontline. Within just three minutes of the second half getting under way, the halftime lead of eight points had jumped to 17.

With Atlanta hitting their stride on the offensive end, the Celtics continued to struggle to get anything going on offense. Thomas was surrounded every time he had the ball and the Hawks were daring other shooters to hurt them. After being down by as many as 22 points in the third quarter, the Celtics were able to cut the lead down to 14 points, but the Hawks answered back with a 7-0 run to increase their lead back to 21 points heading into the fourth quarter.

The Hawks continued to have their way in the first few minutes of the fourth quarter. Al Horford, after struggling offensively for most of the series, found his groove in the second half and was a big part of putting the game out of reach. The C's started hitting some threes in the fourth quarter, but it was too little too late. A 25-7 run cut the Atlanta lead down to 10 late in the fourth, but that was the lowest that it got.