Red-hot Celtics have a 15.8% chance to make the NBA Finals? 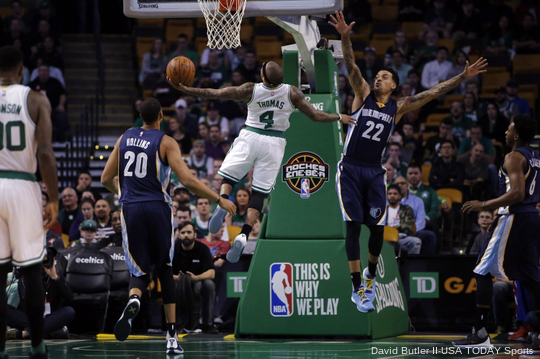 Basketball-Reference.com runs simulations (7,500 of them) in an effort to predict what will happen for the remainder of the season.  According to the site's current metrics, the Celtics most likely record is 49-33, and they have a 15.8 percent chance of reaching the NBA Finals:

Boston's Finals chances aren't far behind Toronto's, or even Cleveland's surprisingly low 37.9 percent, for that matter.  Also worth noting is the enormous drop off after the top three--despite being only 1.5 games back of the Celtics in the standings at the moment, Basketball-Reference doesn't project the Heat (or anybody else) as a serious contender to win the Eastern Conference.

The C's have a very difficult schedule from here on out, but they've also been playing spectacular ball of late.  They haven't lost at home since January 6, going from sub-.500 (9-10) at the TD Garden to 23-10 in the last two months.

As far as the title goes, Basketball-Reference actually gives San Antonio (39.3 percent) the best shot, slightly better than Golden State (36.2 percent).  And how about that 2.7-percent possibility of the Celtics winning the whole thing?  FiveThirtyEight.com has a similar calculation, setting the number at an even three percent (although it doesn't use decimals).

"So you're saying there's a chance."