How worried are you about Marcus Smart's terrible shooting lately? 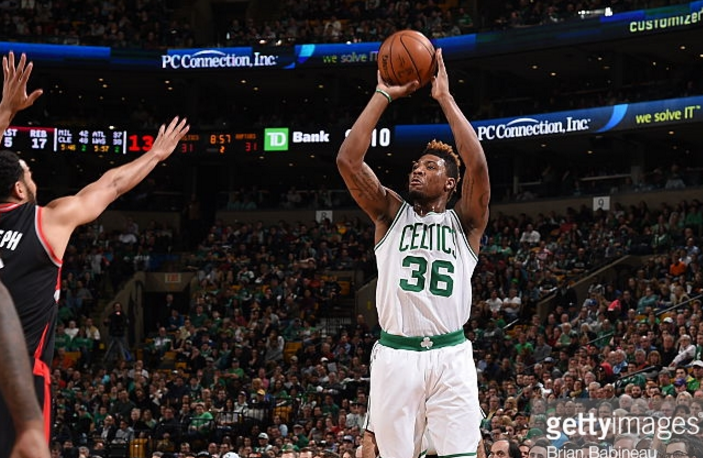 "Terrible" may sound harsh, but it's an accurate description of Marcus Smart's recent stretch of shooting.  Over the past eight days, there have been 11 instances of an NBA player making one or fewer field goals while taking at least eight attempts.  Three of them belong to Smart.

After a blizzard-induced extra day of practice temporarily got Smart's jumper back on track in late January, the second-year guard's field-goal percentages took a turn for the worse in February.  In 23 games through February and March, Smart is shooting 32.1 percent from the floor and 25 percent on three-pointers.  In March alone, his numbers have dipped to .286 from the field and .170 from deep.

However, there are several reasons not to panic.  Before the Celtics' tilt with the Raptors, ESPN Boston's Chris Forsberg wrote a great piece detailing Smart's effectiveness outside of shooting, including the following:

But dismissing his offensive production based on his shooting stats alone is simply lazy. It ignores the fact that, in that same 16-game span, the Celtics are averaging 105.1 points per 100 possessions with Smart on the floor, which is 2.6 points better than Smart's offensive rating in 34 appearances before the All-Star break.


On the heels of his third brutal scoring outing in five games, Smart did not sound the least bit deterred and is convinced that his shots will soon begin to drop.  Via Scott Souza of the Providence Journal:

It's weird because when I'm practicing those I'm knocking them down, and I get in the game and I cant buy a bucket.

Just got to keep shooting. You practice, you work, you get in the gym. All you can keep doing is practice what you keep practicing and transfer it over to the games. Eventually, the shot is going to fall.

Everything is right. I'm open. The follow through is there. It's just not falling. I've watched plenty of film where the ball is halfway down and comes back up. Just have to keep shooting.


Yes, we'd all be much happier (and the C's offense would run a lot more efficiently) if Smart could just nail open jumpers on a regular basis.  Chances are it's not going to happen this season, but it shouldn't be a long-term concern for Boston.  Bad shooting can be fixed--it simply requires serious effort and hard work on the player's part and it appears that Smart is more than willing to put the time in:


Smart is in just his second year in the league and he's still only 22 years old.  Be patient Celts fans, he'll get there.