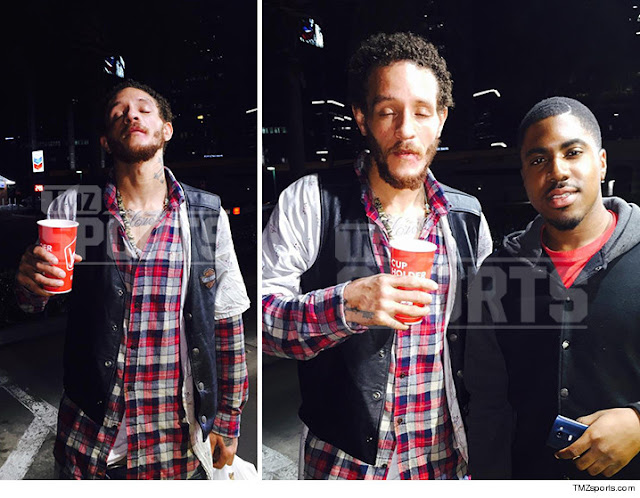 Former Boston Celtics guard Delonte West -- a fan favorite for his quirky personality, his willingness to work at Home Depot during the lockout, play basketball with a sock, and his ability to spit rhymes about KFC  -- looks like he has seen better days.

Some troubling images of West recently surfaced on TMZ, where he was spotted by a fan in a Jack in the Box parking lot in Houston, TX without shoes and appearing pretty disheveled.

When the fan asked if he was Delonte West, apparently West replied "I used to be but I'm not about that life anymore."

It's actually a sad story ... the person who shot the photo is a huge basketball fan and said they noticed the former 1st round draft pick wandering around outside of a Jack in the Box around 10 PM all by himself with no shoes.

When the fan approached him and asked, "Are you Delonte West?" -- he replied, "I used to be but I'm not about that life anymore."

We tried contacting West to find out if he's okay -- and even reached out to his old agent -- but we couldn't get in touch with him.


32 year old West was diagnosed with bipolar disorder in 2008 and has had a troubled past. While he last officially played in the NBA for the Dallas Mavericks in 2012, Doc Rivers gave him a shot to play for the Los Angeles Clippers during the 2014 Las Vegas Summer League, but he did not make the final roster. In 2015 he served a stint in the D-League, but was waived by the Texas Legends after suffering a season-ending injury.