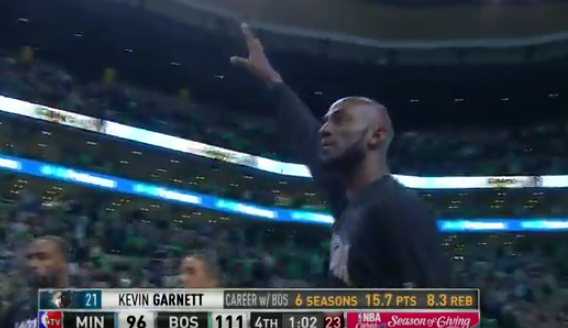 Even though it was announced pregame that Kevin Garnett would not take the floor on the second night of a back-to-back, it quickly became clear that much of yesterday's Celtics crowd either didn't know, or didn't care.  Chants of "We want KG!" echoed throughout the TD Garden all night long.

With the C's leading by 15 late in the fourth quarter, Brad Stevens called a timeout to empty his bench--or so he thought:


Stevens was asked if he called last timeout for KG. "I was subbing. But in retrospect it was a hell of an idea."
— Jay King (@ByJayKing) December 22, 2015


The cheer shifted to "Thank you KG!" and the 20-year-veteran's beloved Gino Time video played on jumbotron:


Definitely tears in Garnett's eyes as he thanks the crowd during Gino time
— CelticsLife.com (@CelticsLife) December 22, 2015


After the game, Garnett shared his thoughts on what Boston and its fans mean to him:

What'd Boston mean, KG? "Everything. It meant everything. I like to say that Minnesota made me a young man. I grew up when I came to Boston"
— Jay King (@ByJayKing) December 22, 2015

KG: "The appreciation of not only the city, but the Mass. area, the Northeast...the love is unconditional. And I’m very appreciative of it.”
— Adam Himmelsbach (@AdamHimmelsbach) December 22, 2015


When asked about retirement, Garnett avoided the question and took it as the perfect opportunity to make his exit.  Via ESPN Boston's Chris Forsberg:


If Garnett never again suits up at the TD Garden, this was certainly a spectacular farewell.