If you've been looking for a way to know exactly how well the Cs are doing in the NBA, at any time — Green Stats is for you. We will use advanced NBA statistics to accurately gauge the Celtics' play — relative to their opponents (in each game) and in relation to the rest of the league. Our main tools will be the Cs' "per possession" scoring and defensive performance numbers (their 'Efficiency Ratings'), compared to their opponents' results (per game) and to the NBA as a whole.

Why "per possession" instead of the usual "per game" or "per-minute" stats? Because that is the key to unlocking a HUGE amount of otherwise-hidden information. How? "Per-possession" means we remove PACE from the stats we're looking at. And that, as we'll soon see, is a critical step.

DEFINITIONS:
"Pace" = number of offensive possessions per unit time. That unit of time is almost always 48 minutes — one full game.
"Possession" — An offensive possession occurs when a team gets the ball on offense; it ends with a score, a foul, or a turnover. A defensive possession occurs when a team is on D; it ends when they get the ball back. Both events are termed "possessions" — one for the O, the other for the D. Note: The number of possessions per team in any given game will always be considered equal for both sides. (That is by definition - due to the way the game is built.)
"Efficiency Rating" = the rate at which a team scores, or allows its opponent to score, expressed as a per-possession (or per-100-possessions) number.

Why is the removal of pace from basic scoring stats such a good thing? Imagine a team that scores 118 points in a game that has, say, 125 possessions per team (a very 'fast' pace). Well, that team — though it has a gaudy total number-of-points scored for the game — actually only scored less than 1 point per possession. That's typically not very good, and they could easily lose that game. (Remember: the other team also gets 125 possessions, by definition.) On the other hand, a team that scores, say, 90 points in only 82 possessions (a 'slow' game) is actually playing well, and is likely to win.

It also lets us see how well our team SHOULD perform, given the known strengths of opponents' defense and offense, and our own recent history — all measured "per possession." By comparing how the Cs should be performing to how they actually are performing — we can clearly see whether they're improving or not, and by exactly how much.

Bottom line: In these Green Stats posts, we're going to see — at every step of the season (i.e., after each game) — exactly how well the Celtics are doing on both offense and defense. Whenever a change happens, for better or for worse — we'll see it first right here.

Note: NBA.com uses different formulas for calculating possessions and Ratings, and may therefore have somewhat different values and team positions in their tables. We use the more-standard formulas that most independent sites use, because we think they're more accurate. But where you look makes little real difference in the end. The relative positioning of teams should not vary very much from one site to another (unless the numbers involved happen to be tightly bunched for a few teams).

You can see a real-life example of what all this means in the analysis, below, of the recent Celtics vs. Spurs game (Nov 1, 2015). So okay — let's jump right in: 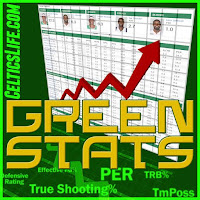 
Celts had a great game in most respects — defense, aggression, hustle, etc. — except for one thing: They had a hard time putting the ball in the net. The rim grew a lid. Example: After 3 quarters, Cs were 2-20 shooting 3s. (Ugh.)

And yet, they were in this game right till the last minute, against a top team. That bodes very well for the good guys!

Cs’ Offensive Rating for this game = 86.7 (pts scored per 100 possessions) — much worse than the league's worst offense last season (which = Philly @ 95.5). [Note: We'll start using current-season comp stats very soon — we just need to have enough data from this season to work with.]

- What else can we say about that? Spurs had the NBA's 2nd-best defense last season. They're supposed to be tough to score on. But the Cs just missed too many open shots. It happens. A little too often in the past couple of games, true — but these shooting slumps tend to blow over in the NBA. (Fingers crossed.)

Cs’ Defensive Rating for this game = 94.6 (pts allowed per 100 possessions) — equivalent to the league's best defense last season, by far. (Golden State's 101.4 was the league-leading DefRtg last season.) The Celts played some great, hard-nosed D in this game. Had they been able to score just a little better, they could have easily won.

- What else can we say about that? SAS' offense last season averaged 108.5 pts/100 possessions: 7th best in the NBA. I.e., it's even more impressive that the Cs were able to hold them to a league-leading scoring low. GREAT defensive game by the boys in green.

So far in this very young season, the Cs' defense has been operating at a level that would have led the league last season. This is great news. It means that their D — which was top-5 in the latter part of last season — seems right back on track this season. When the offense finally kicks into gear, this team could start looking really good out there.

- Crowder must feel like the NBA's pinata -- getting SLAMMED on one end with no call, then ticky-tacked on the other end. Sometimes it seems the refs call games like they think they should go down based on the reps of the teams involved — rather than calling what they see. We'll be happy when the new video refs take over the maximum possible number of calls.

- Cs played like winners in this game. Their shots didn't fall — but that should change soon enough. Usually does.