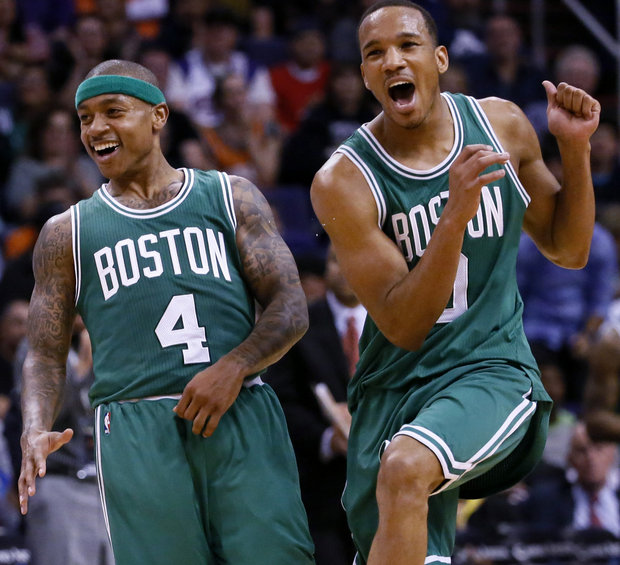 Before last night’s tough loss to the Mavericks, head coach Brad Stevens was still unsure how he would handle his starting backcourt moving forward. Much of the early season has seen either Marcus Smart or Avery Bradley battling minor injuries that have led to game time decisions on their availability. In their absence, Isaiah Thomas has stepped into the first unit. But now with Bradley and Smart back and healthy, we have reverted to asking the same question from the offseason. Should Thomas be a starter? If you asked me this question over the summer, I would have said an emphatic no. IT was phenomenal as the 6th man last season, and was probably robbed of the award. But through 11 games, my opinion is beginning to shift. Let’s put numbers aside on this one. I could dig into the data and research all the analytics with +/- net ratings per 100 possessions broken down by each quarter in home games after back to backs on Fridays in white uniforms but I won’t. I don’t think stats really tell the whole story or can definitively answer the question here. Offensively, the opening lineup that included the Bradley/Smart pairing earlier in the season was painful to watch. There’s been better shooting percentages at "3 shots for $5" rip off carnival booths. I’m not arguing that it was only on the guards by any means, but that grouping clearly didn’t work. It seemed like Stevens was calling Isaiah’s name earlier and earlier to come in and salvage the quarter. Defensively, there’s no question that the team is better with AB, Smart, and Crowder hounding the perimeter. Although, Thomas has not been the defensive liability he was a season ago. He has certainly held his own and is creating a lot of turnovers in his own right, something he has not got a lot of credit for. A legitimate theory for why IT4 is so good off the bench and why some would still like to see him as a 6th man again is because he feasts on opposing benches. There are those who fear he might not be as successful against other team’s top players, but that hasn’t really been the case this year. The 5’9” guard has held his own in that role and hasn’t seen much of a drop off in production. Sure he looks better against worse defenders, but couldn’t you make that argument for anybody? It’s easy to say the same for #0. Bradley has come off the bench on fire the past two games, something he was not accomplishing as a starter. This could be the result of change in mentality, going from wanting to get the team off to a good start and flow offensively to “get me the damn ball”. He could be looking for something to prove and that starting position back. Having him come off the bench will give the NBA bench guards nightmares with his defense. And if that’s the best way to get offensive production out of him too, then it’s a no-brainer. My guess is that Brad Stevens sticks with the usual starting 5 in Thomas/Smart/Crowder/Amir/Sully tomorrow night against Brooklyn, but this lineup will be a topic of discussion all season long. Photo Credit:AP Photo/Matt York For more Celtics news and information follow Nolan on Twitter @NolanChuck