What the Hell Happened to...Dee Brown? 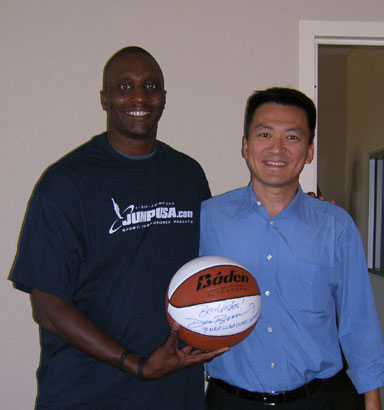 Was it really almost 25 years ago?  That Decovan Kadell Brown soared through the air, his right arm covering his eyes while dunking the ball with his left?  That he pumped-up his shoes in front of a national audience, giving a new face to Celtics pride?  It may also be so long that you forgot how well he held-his-own against a future Hall of Famer in the Celtics tough second round loss to the Pistons during his rookie year.  If you followed the Celtics in the 1990s you absolutely remember Dee Brown.

The Celtics picked Dee #19 in the 1990 draft out of Jacksonville, surprising a few folks and also upsetting Jerry West who wanted the Lakers to draft him.  Instantly he gave the Celtics a shot in the arm adding fast legs, a willingness to learn and an appreciation for the veteran leaders Boston had in place.  Along with Reggie Lewis, Kevin Gamble and Brian Shaw, they became the "Zip Boys," leading to a memorable caricature t-shirt.

And while Dee's speed was impressive, his first half contributions were very rookie-like: there were sporadic flashes of brilliance intermixed with growing pains.  He needed an event to showcase himself, to make a name for himself to the rest of the world outside of the Celtic faithful.  Enter the 1991 Slam Dunk Contest.

I'll admit before it started I thought Shawn Kemp would win the contest; his combination of  athleticism, size and strength hasn't really even been matched 25 years later, although Dwight Howard may have an argument.  But I was pulling harder for Dee than I ever had for one of these events.

If you weren't around back in 1991, this was still when the dunk contest mattered.  Long before regular access to YouTube was at your disposal this was the one night a year you could see original (at the time) never-before-seen dunks.  This was just 3 years removed from the epic Michael Jordan-Dominique Wilkins 1988 dunk contest thriller in Chicago. 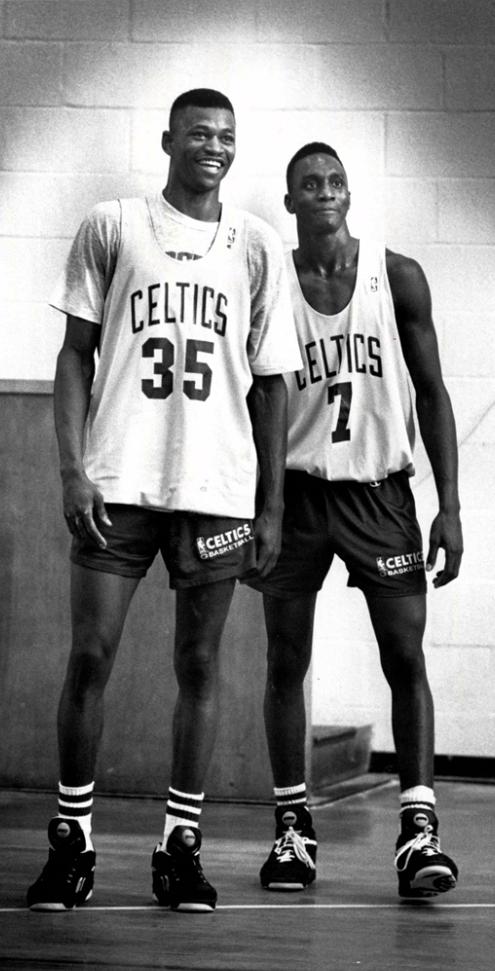 When Dee began the event pumping up his Reeboks to get himself pumped up (and the crowd into it) I had a sense it was going to be a special night.  Remember this was right after Craig Hodges got done drilling 19 consecutive 3 pointers in the 3 point shootout to start the festivities.  And while Dee is most known for his final dunk, I was most impressed by his 3rd dunk. Check it for yourself at the 1:21 mark:


In basketball history there's iconic photos.  Jordan's shot over Ehlo.  Mutombo clutching the ball after knocking out Seattle in '94.  Dee Brown's no-look dunk has a special place there too. 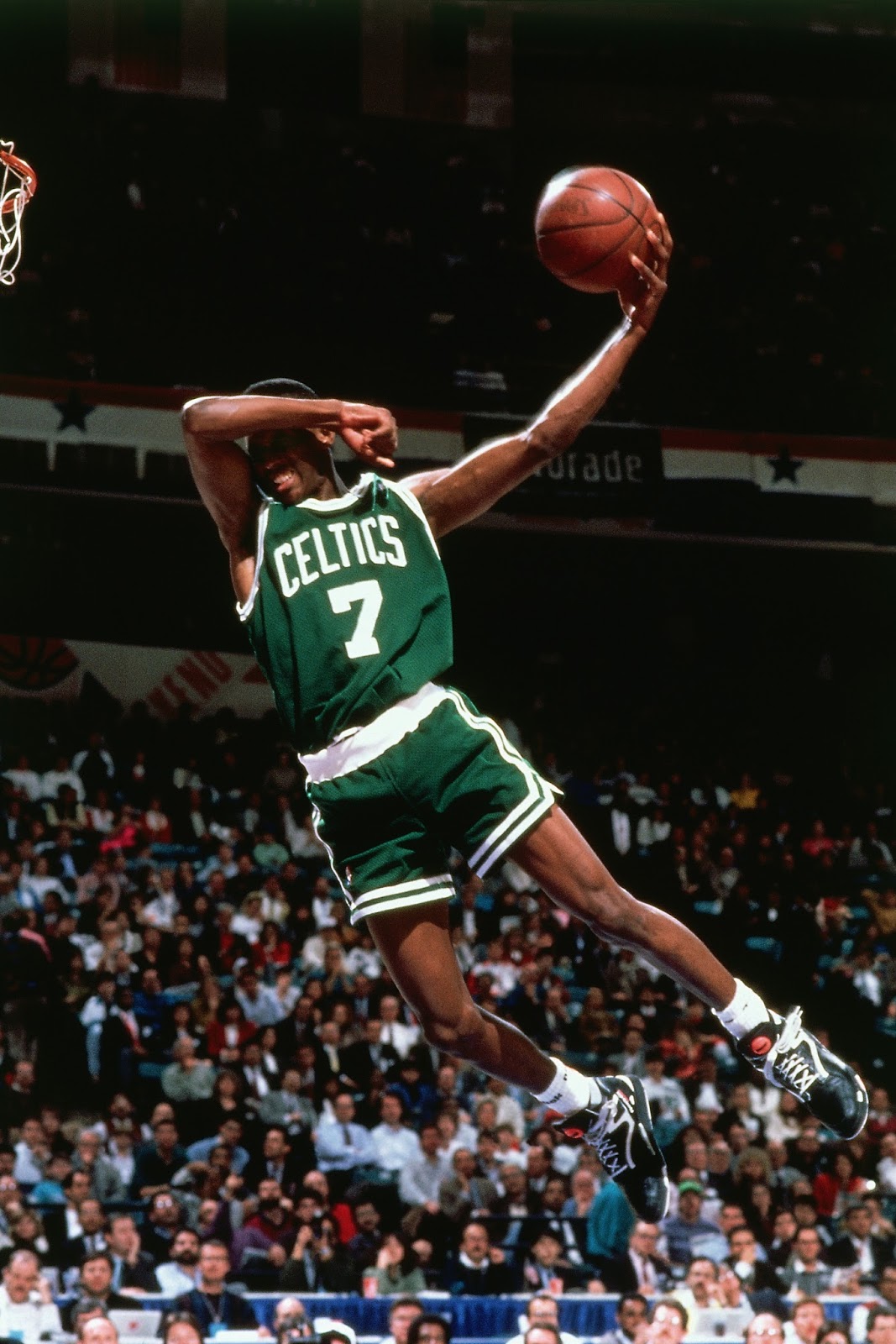 Winning the contest catapulted Dee into the limelight.  I even recall an instance where reporters sidestepped Larry Bird following a game soon after to interview Dee.  Bird, never the magnet for attention, was thrilled.

It was evident pretty early on in the 91 playoffs that the spot was too big and the pressure too much for two of the Celtics' starters during the season, Kevin Gamble and Brian Shaw.  Shaw you'll remember was the starting point guard, who had left the Celtics the previous year to play in Italy due to contract negotiations with the Celtics.  Yet if you recall that series you'll remember it was Brown who played more minutes and consistently matched up head-to-head with Isiah Thomas and the Pistons in the second round.  In fact when that series ended the rumors already began about who would start the following season between Brown and Shaw. [TB Tangent: In my mind, those playoffs made Shaw for his career.  I was hopeful Shaw would be a big part of the Celtics' future despite the squabbles with the front office.  It was clear to me that he wasn't a big-game playoff performer and never would be (this one aberration aside).  Dee Brown was a better NBA player than Brian Shaw and it was evident from those 1991 playoffs who you'd prefer in the big-spot.  Shaw always seemed destined to head to LA].

Dee was ready to take it to the next level that 91-92 season.  I remember not being as peeved about missing out on Tim Hardaway for Michael Smith after Brown's rookie year.  But alas it all came crumbling down for Dee.  He suffered a brutal pre-season injury on October 30, 1991, where he tore cartilage in his left knee (his jumping knee).  Arthroscopic surgery revealed a peripheral detachment of the cartilage and repairs were made.  As Dee put it at the time: 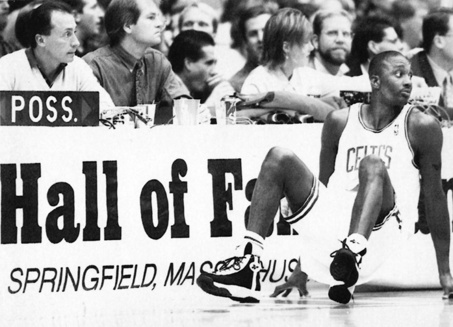 "People had expectations before I got hurt," Brown said. "Now that the injury comes, it sets me back a little with my progress as a player but that's not going to stop me. I just have to keep plugging away. I think it's just going to take some more time for me to get to where I want to be." 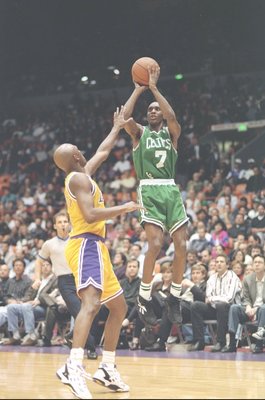 But this was way before microsurgery came into play and it effectively cost Dee a lot of his explosiveness.  For the rest of his career he settled for jumpers more than he did that rookie season.  He seemed a bit more tentative and uncertain.  He didn't have that total fearlessness he did that rookie year.

Dee also got caught up in the position-game.  A 6'1 combo guard, Dee would've had a fantastic career as someone able to come in and spell either the point or off-guard.  But he wasn't a pure point and this is when height mattered a lot.  In other words, 6'1 shooting guards weren't very common at all.  When he was paired with Sherman Douglas in the starting backcourt for a couple of those years, the Celtics were a major defensive liability at the guard spots and always subject to having the opposing shooting guard post up Dee.

Despite increasing his point production and even being named the Celtics' captain at one point, he never would reach that initial level of greatness fans thought he might.  Dee really summarized it best:


It's pretty true.  If Dee was asked to be a contributing player, someone like a Gerald Henderson while playing with stars like Bias and Lewis, how much different would we look at his career?

Once again count me as believing Dee would flourish more in today's positionless NBA where small-ball lineups are not a ploy.  He could play shooting guard the majority of time (Dee was more of a two than a one).


Dee spent the majority of his career in Boston, even somehow overcoming the chopping block of the Evil Emperor's initial cleaning of house.  But Dee didn't last long with them, just half a season before he was included in the horrendous Chauncey Billups for Kenny Anderson trade.  He spent 2.5 years in Toronto and then 2 final seasons with the Magic, although he only appeared in 7 games each of those final two campaigns.  He retired after the 2002 season, concluding a 12 year career. 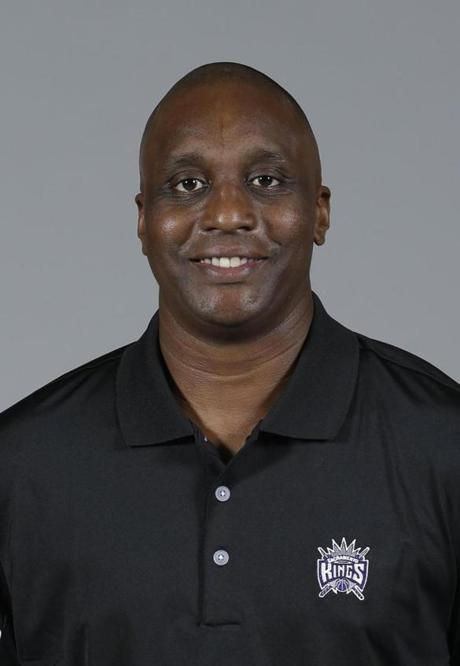 Since retiring Dee has remained in the public eye:
Today Dee is an assistant coach with the Sacramento Kings.  He and his wife Tammy have four children named Alexis, Alyssa, Alanni and Anakin.

CelticsLife thanks Dee for his time with the team and wishes him luck with any future endeavors.