The Boston Celtics boast a rich history that began in 1946 and has continued with seventeen championships and millions of memories. 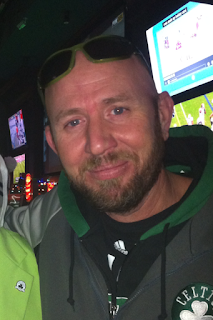 CelticsLife's "I Am Boston" offers a closer look at the individuals that make up the most loyal and supportive professional sports fans in the world.

I have been a Celtics fan for 30 years. When I was a kid there were only so many teams on TV and when I had found out that Larry Bird and I had our birthdays on the same day, I was hooked on the Celtics!

On my birthday in 2005, the Celtics were playing the Nets in New Jersey and I was sitting behind the scorer's table at center court (best seats I've ever had). The game started horribly for Boston, down quickly 17-0. In a very quiet New Jersey arena I was cheering the Celtics and booing the Nets and everybody could clearly hear me. After a tough fight to tie the game, Paul Pierce had the ball with 7 seconds left. 3, 2, 1, with his patented step back jumper, Pierce sealed the comeback! What a way to celebrate my birthday! To top it off PP threw me his sweaty headband!

I was also able to be at the Garden to watch MY Celtics win banner 17! What more can I say? It's what every fan dreams of and very few get to do!! And to chant BEAT LA was awesome, too!

It was also really special to take my girls to their first game at the TD Garden. They were super excited to see themselves on the Jumbotron. It's a long drive to Boston but for memories like that it's well worth it.

As further evidence of my love of the team, my two girls middle names are Boston and Celtic. And my license plate on my car known as "the Celtics mobile" is BstnCelt. 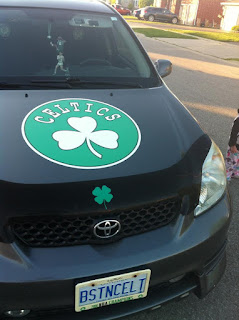 Over the years there have been many players that I loved but no name on the back is more important then the name on the front. I always liked the guys that did the dirty work and weren't afraid to mix it up - guys like Dannny Ainge, Eric Williams and Brian Scalabrine.

My favourite player on the team now has to be Marcus Smart. I think he is what Boston Celtics basketball is all about. Plays hard, is a pass first point guard and plays defense - an all-around team guy. He is our future!

Want to be a featured fan in I Am Boston? Email chris@chrisQuimby.com to receive the interview form. All entries and edits are posted at blogger's discretion.

All fans on I Am Boston participate voluntarily in a desire to share their love for the team. CelticsLife asks that comments be respectful.