Could Brad Stevens be the next head coach for Team USA? 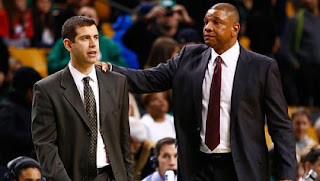 Mike Krzyzewski will step down as the head coach of Team USA in 2016 after the Olympics in Rio.

This now brings up an interesting question; Who will replace Coach K when he leaves?


“I plan to, right after hopefully winning another gold medal in Rio in ‘16, go to sleep and dream about who that next person might be and what he looks like,” Colangelo told CSNChicago.com. “Until then I have so many things going on in my small brain, I can’t even focus on it.”


Colangelo, in his previous moments of candor with CSNChicago.com at Summer League, also stated he had a coach in mind to replace Kryzyzewski but he didn’t want to reveal who it was.


“That is true and I’m the only one who knows it,” Colangelo said laughing. “It’s a big world and there’s a great coaches. And I don’t want to give any indication who it might be. Heck, you might wake up and find out I called you to ask if you were interested!”


In the NBA, it's not hard to figure that Doc Rivers and Gregg Popovich are the frontrunners with Tom Izzo being the big name in college circles. But what about Brad Stevens?

According to Kurt Helin of NBC Sports, there are 3 criteria needed to be in the running to be Team USA's head coach.

1) Players have to want to play for him. The USA has better and deeper talent than any country on earth, and it’s not close — but that only matters if guys show up. Pick someone they don’t respect, try to go too far outside the box, and you could end up with a USA “B” team (which may still win the gold, but is more vulnerable).

2) They have to be good at Xs and Os, and not wed to one system. Coach K has laid a foundation of a system that works for Team USA — pressure defense leading to up-tempo offense — because it exploits that athletic advantage we have in the USA. However, as the players putting on the jersey change, as the game evolves, this coach needs to be adaptable and not just change with it but be a step ahead of it.

3) He has to be above the petty politics of agents and shoe companies. There are a lot of people trying to influence the selection of players for Team USA, all for their own financial gain. (And to suggest Nike has not and does not have influence would be naive.) This coach needs to be able to stand up to and rise above those interests if it is best for the team.

If that doesn't describe Stevens to a tee then I don't know what will. His systems is right in line with Coach K's foundation of an up-tempo offense and he can manage the politics of the shoe companies no sweat.

About players respecting him, I seem to remember back in April after the Cavaliers swept the Celtics that a certain player named LeBron James had some high praise for the C's head coach.


"I highly respect their coaching staff and especially their head coach," James said. "A very well-coached team, he put those guys out there every night and put them in position to win the game and I think Brad Stevens is a very good young coach in our league."


Coming from the best player in the league, I think Stevens has the respect factor on lock.

Ultimately, do I think that the Colangelo will pick him? No, but he will be in the running.

In reality, it will probably be Doc Rivers and they will cite his experience as the main sticking point as to why they pick him. Not a bad excuse, but somewhere down the road, do not be shocked if Brad Stevens leads the U.S. to a gold metal.