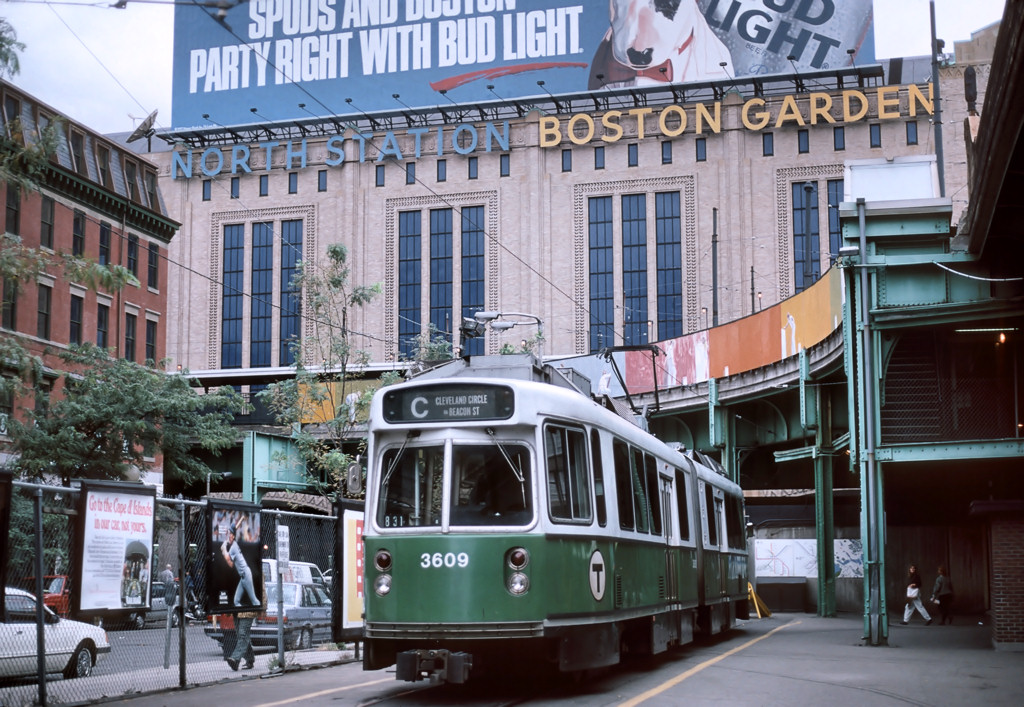 A “Fan”-tastic Voyage Back in Time

Hey, come on, come ‘long take a ride…
Forget about your troubles and your nine-to-five
And just sail on, that’s what you do!
--“Fantastic Voyage,” Lakeside

The world would reappear as the transport vehicle emerged from the underground tunnel and continued its ascension, evoking a shrill squeal as it veered left and eased to a halt.

The trolley that would rattle its way along the rest of the Green Line to Lechmere at that hour of a fall Friday would be significantly lighter of load.

Our little group – admonished as always upon departure to behave and stay together – went with the flow, down one level to the old depot that doubled as the arena’s box office. We hadn’t needed to wait in one of the longer lines for “Today’s Event” in a month, not since Opening Night.

There was a quick stop required at the line-less “Advanced Sales” window to grab tickets for the next Friday home game – in this case two weeks ahead, the day after Thanksgiving. Seats in the Old Garden’s even older Second Balcony – even higher above courtside than ol’ Johnny Most – sold for just two bucks. If we bought our tickets ahead of time – even just a week in advance, and the Celts played at home just about every Friday in those days – we’d always get front row seats, almost always in one of the middle sections right behind the marquees that enticed the building’s coming attractions (Pro Wrestling, Nov. 24).

Does anybody else out there recall the numbers of those four middle sections of the Garden’s second balcony? (If the powers-that-be here at celticslife.com can handle the details, I’ll spring for a t-shirt or something for the first commenter to come up with the right answer. Here’s a hint they all have three digits.)

The vantage point, while altitudinally “nose-bleed,” actually put our eyeballs quite close to the sideline. That balcony’s first couple of rows jutted out farther than did those primitive luxury suites that were on the way.

An ordinary outing of this sort would include a brief swing through the train station’s “penny arcade” right around the corner from the ticket window and next to the ramp up to the arena itself – the corner by the pizza stand, I believe, it over-taxed memory can be trusted.

But this particular occasion was extra-ordinary in two different respects.

First of all, this was a “Don’t Miss the Warm-Ups” game. Opening day of the Boston Shootout always offered the same anticipatory “feel.” Prior to the traditional warm-up, each team was given the court to itself for five minutes or so just to put on a lay-up-line show. Sometimes the dual preparations would become a whole ‘nother kind of duel. Must-see indeed, for any hoops junkie.

There was no “Can You Top This?” in NBA pre-games beyond amicable teammate banter, but there were some dudes who’d treat the early arrivals to some “Oohs” and “Aahs.” For example, that up-coming post-holiday excursion would provide us with a second serving of the Hawks’ Jumpin’ Joe Caldwell. The opposition on this particular evening included a pair of Warm-Up Wizards, one a genuine Hall of Famer who inspired Most, the C’s legendarily creative play-by-play man, to fracture the rules of grammar and make the phrase “Hang from the ceiling” an adjective to describe Gus Johnson’s jump shot.

The jovial Johnson was occasionally prone to show off those hops just for fun. But he primarily preserved his energy for the sort of “fun” that a classic Sports Illustrated cover (10/25/71) dubbed “The Classic Confrontation.”

Now, the other guy, who would become more famous as a Dad than ever he was as a player – excepting, of course, in the eyes and hearts of the Bright(on) Boys of our little informal club – had no such worries. If Big Ed was taking off his sweats, it either involved fouls some kind of way, or was because the game had gotten out of hand.

In the lay-up line, then, the long and lanky third year pro from little Jackson State was unlikely to deny us a treat or two, given the least bit of encouragement. Eddie played sparingly for several more teams in both pro leagues, then re-appeared a decade or so later, clipboard in hand, upon the bench of a major college team on a Cinderella run to a national championship.

There have been many other and more accomplished dunkers to come along since. But when it comes to pioneers in the performance art of dunking, a certain (sadly injury-prone) national champion and College Player of the Year ain’t nothin’ but Ed Manning’s kid.

Coach Tom Heinsohn’s initial team put up a good fight that night but was really no match for a squad led by a Pearl (or Black Jesus, if you’d prefer) and destined to reach the Division Finals. The game itself has left no particular memories. But I have mentioned that the occasion was less than ordinary for two different reasons, the first being Danny Manning’s Pop.

For the other, our evening incurred an additional responsibility, creating yet another reason for our prompt arrival and entry. We had to spot somebody in the crowd and get his attention so as to meet up at the end of the game.

This gentleman lived a couple of houses down from a buddy and, through the buddy’s father, had made us an offer we couldn’t refuse. It seems this neighbor had been either a high school or college teammate of Baltimore Bullet head coach Gene Shue. We’d been invited to go into the team’s locker room after the game.

Trust that none of us needed to be asked twice.

The final buzzer had us scurrying down to the lobby level and then up under Mr. P. along with his two young boys. Before long, we entered a relatively small room, getting only two or three steps inside. Manning, Johnson and another player were sharing a bench, Jack Marin and Leroy Ellis standing behind. Coach Shue introduced each player; they all had the same first name, Mister. Then, it seemed as if Mt. Monadnock, sporting an Afro and towel from the waist, had decided to re-locate from New Hampshire.

But even more jolting than the massive girth and just plain thickness of a young Mister Wesley Unseld was how far back our young necks (not just our heads) had to stretch to see all the way up into the face of Mister Ellis, who stood 6’11." 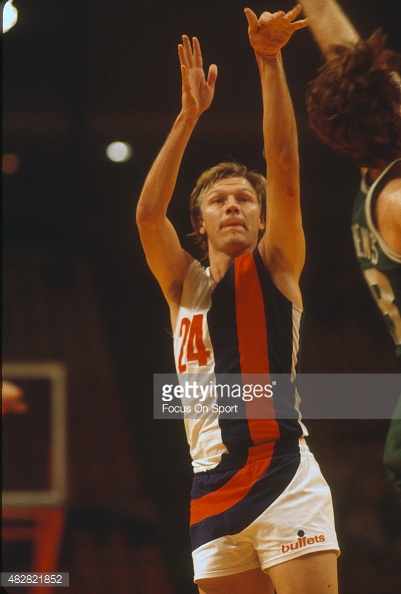 Marin, above and Ellis below, were far more accessible than they would've been today

Taking a liking to the older of the little kids, Mister Johnson predicted to one and all that little man would grow up to be a hockey player, grinning broadly as he spoke.

In no time, we were offering our thanks, retracing our steps and back in the real world, though still quite awe-struck.

I was reminded of that time, and particularly of that place, while leafing through the current (9/21/15) issue of Sports Illustrated. A fan comment compared Deflate-gate and the Patriot Way to the hidden and allegedly at times under-handed components to the Celtics’ legendary “edge” in that Garden during Red’s reign. The Bullets’ locker-room accommodations on that long-ago Friday the Fourteenth were basic and functional.

As were, it should be noted, the 13,909 seating locations of the time.

Didn’t matter to us … the Garden or Fenway, each was an accessible palace.

And any trip there held the potential for a Fantastic Voyage.

There is one other detail deserving of mention regarding that game on the second Friday of November in 1969 – a something with more than just my recollections for verification: it marked the professional debut of Jo Jo White.