Marcus Smart appears to be fine after gross hand injury 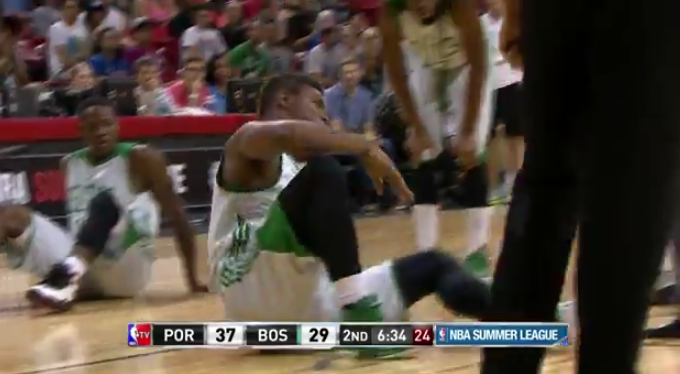 If you happened to catch the Celtics 91-85 Summer League playoff victory last night, you may have had a near heart attack watching Marcus Smart writhing on the ground screaming in pain:

We soon found out that Smart dislocated two fingers on his right hand in a rather gruesome manner.  Despite how bad it looked, it appears as though the C's second-year guard will be just fine:

Marcus Smart needed 5 stitches but x-rays are negative. X-Rays will be sent to Celtics docs for another look.
— Adam Himmelsbach (@AdamHimmelsbach) July 17, 2015

Micah Shrewsberry on Marcus Smart: "Just kind of like the warrior he is, he comes right back out to the bench and he's leading cheers."
— Jay King (@ByJayKing) July 17, 2015

Thanks to everyone for the prayers thanks to the staff for all that they did to help just a minor set back for major comeback
— marcus smart (@smart_MS3) July 17, 2015


Don't expect to see Smart on the floor for the remainder of Summer League, but the club wasn't even worried enough to make him go back to Boston:

There's no official timetable yet for Smart, but the general consensus of Celtics fan Twitter doctors (many of whom claim to have suffered similar injuries) seems to be that he will be back to normal in a couple weeks.