Who was Howie McHugh? 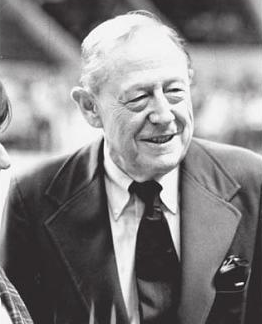 If you ever wonder where the name "Boston Celtics" came from, you may not have known that Howie McHugh had a lot to do with it.  McHugh was a star hockey goalie at Dartmouth before Celtics' owner Walter Brown hired him as their publicity director.

In the summer of 1946, Brown was having a conversation with McHugh on what the name of the new Boston basketball entity should be.  Some of the names discussed?  The Whirlwinds, Unicorns and Olympics.  But Walter Brown had an epiphany:

McHugh tried to dissuade Brown not to use the name but Walter would hear none of it. (Thank God Walter!)

McHugh also played a role in Chuck Connors broken-backboard incident.  Unlike Shaquille O'Neal or Darryl Dawkins years later, Chuck Connors broke a backboard just from shooting the ball (he was always considered a better actor than hoops player) during warmups for Boston's first game.  McHugh had to go retrieve a new backboard to bring to the arena to make sure the game could take place.

There's even an award named after Howie today: the McHugh/Splaver "Tribute to Excellence" Award which goes out to the NBA executive each year for top level PR skills.  Splaver was in regards to Tom Splaver, who headed up the PR for the Washington Bullets in the 1970s.

The next time someone mentions to you about Jeff Twiss or any current Celtics publicity don't forget about Howie McHugh, and how we almost became fans of the Boston Whirlwinds.