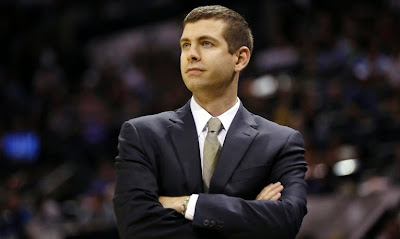 The Coach of the Year is always a tough vote to figure out, as it's a tough to figure out how much a coach factors into a team's success and how much of it has to do with the talent itself.

Because of that it's hard to have too many qualms with the voting, but I do find it a little disappointing that Stevens was unable to crack the top 3: If a voter's primary criteria for Coach of Year is overachieving, isn't it safe to say that the difference between the talent on the Milwaukee Bucks and Boston Celtics is greater than one game? Not that the Bucks are loaded by any means, but it'd certainly seem like Jason Kidd has a lot more to work with than Brad Stevens does.

But alas, third runner up will have to do for now. Fans who got to watch this guy coach night in and night out know how special he is, and it'd certainly seem like his winning the award is a virtual certainty.