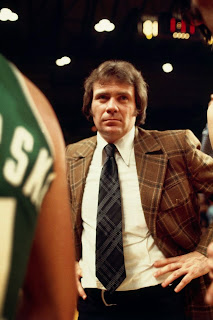 The morning after the All-Star festivities officially began at Brooklyn's Barclays Center, the Naismith Memorial Basketball Hall of Fame announced the 12 finalists and five direct-elects to the Class of 2015. Among the latter group is Celtics legend Tom Heinsohn, who will become the fourth person ever to be enshrined as both a player and coach.

Heinsohn was elected by the Hall's Veterans Committee in recognition of his nine-year tenure as the Celtics' head coach, during which he won two championships and was the 1973 Coach of the Year. He was originally inducted as a player in 1986, following a nine-year career in Boston that saw him earn eight championship rings, six All-Star nods, four All-NBA second-team selections and the 1957 Rookie of the Year award.

The other three men to be inducted for both their playing and coaching careers are another former Celtic, Bill Sharman, Lenny Wilkens and John Wooden.

The list of 12 finalists also includes two former Celtics, Bill Fitch and Jo Jo White. Fitch led Boston to the 1981 Championship and was a two-time Coach of the Year. In 1996, as part of the NBA's 50th anniversary celebrations, he was named one of the 10 best coaches in league history, and is currently the only one of the 10 not already in the Hall, which would seem to make him a lock.

White played the first 10 seasons of his 12-year career in Boston. During that span, he won two Championships, being named the Finals MVP in 1976, and was named to seven All-Star games and two All-NBA second teams. The Celtics retired his number 10 jersey in 1982.

As far back as 2006, ESPN's Ken Shouler put White on a list of five eligible players who should already be in the Hall. The other four? Adrian Dantley, Artis Gilmore, Bernard King and Dennis Johnson, all of whom have since been elected. It's about time for the voters to do the right thing and enshrine White in the Hall where he belongs.