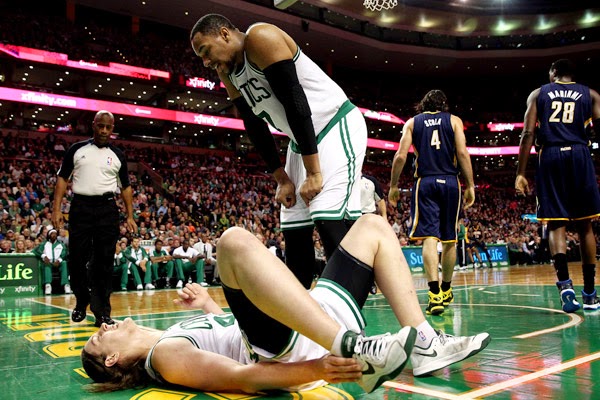 With Kelly Olynyk seen wearing a protective boot over his injured ankle on Thursday, all signs are pointing to this year's NBA All-Star Weekend being the first since 2001 with no Celtics player involved in any event.

If Olynyk can't go, this likely will be the first time since 2001 that the Celtics will not have a single participant at All-Star weekend.

Olynyk was selected earlier this week to the World team for the freshly formatted Rising Stars Challenge. The break is still two weeks away, and there remains a possibility the Canadian heals in time to play in his second straight Rising Stars appearance. But that will all hinge on how his treatment goes in the coming weeks.

Coach Brad Stevens via A. Sherrod Blakely of CSSNE:

“If he’s ready to play, that’s the trainer’s and Kelly’s call. It’s an honor to be chosen for those type of things. Obviously, there’s no way we’d want him to do it unless he’s 100 percent healthy. But if he’s ready and healthy, that’s their call.”

There is no timetable for return, though ESPN's Chris Forsberg speculates that Olynyk could be out until mid February. It's pretty evident coach Stevens would like his big guy to sit this one, but he also isn't going to force him out without having a choice in the matter. No surprise there.

What does come as a surprise is Marcus Smart being snubbed for the U.S. Squad in the same Rising Stars Challenge. According to John Hollinger's NBA Player Stats on ESPN.com, Smart has a higher player efficiency rating than Zach Lavine and Kentavius Caldwell-Pope who were both named to the U.S. team.

Hell, based on the video below, I'd make a case for Smart to be in the dunk contest this year too (and I think he'd win).

There's a slight chance Smart could become a replacement for someone on the US side should they get injured, but unless Kelly Olynyk is 100 percent in two weeks it looks as if no Celtics will play a part in All-Star Weekend in 2015. But hey don't fret, atleast we've got Mason Plumlee in the dunk contest to look forward to..