Report: Sacramento is willing to trade Nik Stauskas. Should Boston get involved? 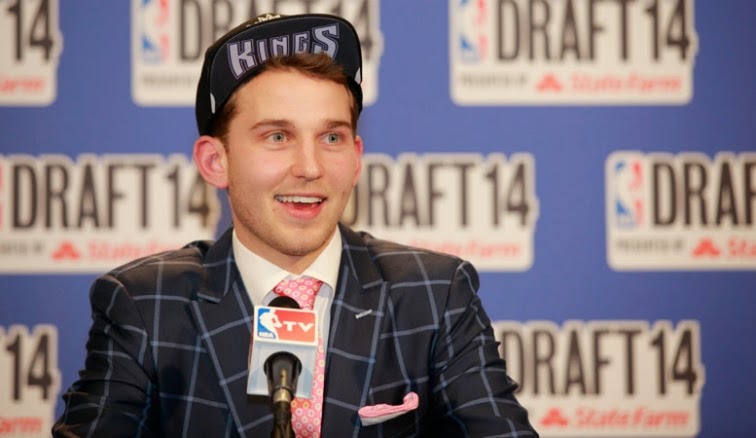 Ken Berger at CBS reports the Sacramento Kings are looking for a big and are willing to trade a rookie they just drafted in the top-10 to get one.

Determined to find an upgrade to complement inside force DeMarcus Cousins, the Sacramento Kings are seeking frontcourt help in a trade and are willing to discuss first-round pick Nik Stauskas in the deal, league sources told CBSSports.com.

The Kings want to pair Cousins with a frontline player who would fit with his post-up skills -- either a stretch four or above-the-rim defender, sources said. They've fielded numerous calls about Stauskas, whose opportunities have been limited with the steadily improving play of Ben McLemore.


This is kind of a big deal, as the Kings' front office seemed pretty pumped to draft the sharpshooter from Michigan at the No. 8 spot.

It's also very telling that the team is willing to throw in the towel on the rookie due to McLemore's play. If only Rajon Rondo were willing to re-sign in Sacremento.

So the Kings want a big who can shoot from range or a good, big defender. Berger notes that they have a couple expiring deals to offer, as well as Stauskas, which means they can grab a guy making up to $11 million. So what are their options?

After looking at who might be willing to part with a productive big fitting either of those two criteria, the results aren't great. Larry Sanders out in Milwaukee could have been an option, if there weren't some serious questions about if he even wants to play basketball. Andrea Bargnani is available from the New York Knicks, but even if Bargnani had any semblance of talent left, he's also expiring and not worth a rookie who still has value. JaVale McGee could be had from Denver, but he's not much more inspiring than Sanders and isn't worth Stauskas. So yea, not much to pick from.

Maybe the Kings would be willing to trade Stauskas for an up-and-coming player. If that's the case, Boston could get involved. No, they don't have much, if anything, to offer as an "above-the-rim defender," but they certainly have a big who can shoot in Kelly Olynyk.

The question then becomes should Boston pursue an Olynyk-for-Stauskas swap? Stauskas hasn't been all that impressive so far this year. He's shooting just 27 percent from beyond the arc and his per-36 minute stats are 9.3 ppg, 2.7 rpg and 1.7 apg. Yuck. But it's far too soon to call Stauskas a bust. He's a rookie. The season's only half over and he's only playing about 14 minutes per night.

Another issue is Boston's current roster. Shipping off Olynyk would help unclog the frontcourt logjam, but it would create a logjam in the backcourt. Marcus Smart and Stauskas could be a deadly duo with Smart's defense and Stauskas' shooting. That leaves Avery Bradley on the outside looking in after just signing a 4-year deal that could be difficult to trade. The team would also have to figure out if James Young is a shooting guard or a small forward.

Bottom line: Olynyk is a real nice player and Boston would have no issues keeping him, but his ceiling is as a role player. Stauskas has the offensive ability to be an above average starter, though he has yet to show it. Boston should look into making this deal, but they may have to take on Jason Thompson's contract or part with a future first-round pick, along with Olynyk, to do it.