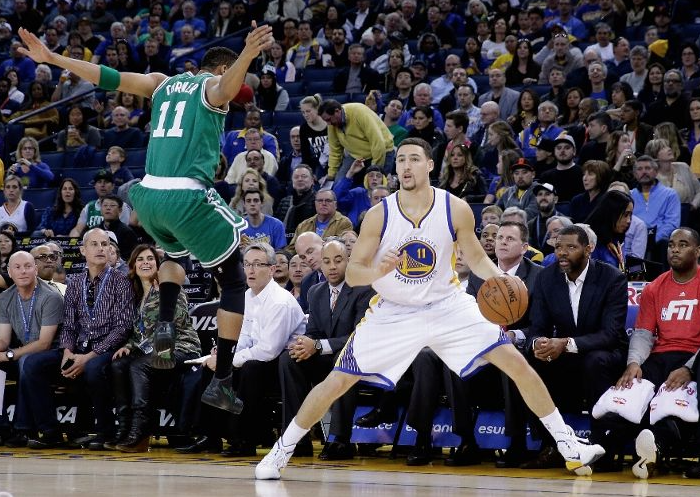 After torching the Celtics for 31 points Sunday night, Golden State Warriors sharpshooter Klay Thompson had some positive things to say about the visitors from Boston:

Klay Thompson: "(Celtics) weren't out there trying to play like Michael Jordan or be the hero. They just played solid team basketball."
— Jay King (@ByJayKing) January 26, 2015

More Thompson on Cs: "They were efficient with their ball movement. They didn't make many mistakes. Each one of them knew their roles."
— Jay King (@ByJayKing) January 26, 2015

The acknowledgement from Thompson provides Celts players and fans with a slight moral victory. After battling back all night, the C's couldn't get over the hump , losing to the Warriors 114-111.

The defeat won't go down as anything but a L in the record books, but the quotes from Thompson are a sign that behind Brad Stevens, the Celts are giving maximum effort, no matter who the opponent.

The green fought hard for 48 minutes against Golden State. Most young teams would have raised the white flag early against the NBA best Warriors, especially when their crowd start going bananas on this dunk by Steph Curry.

Instead Stevens' crew didn't let up till the final buzzer which didn't go unnoticed by Warriors head coach Steve Kerr:

Per Steve Bulpett of the Boston Herald:

They kept fighting.That’s what makes their team impressive with Brad (Stevens) and his staff. They really do a good job of fighting and competing. They stayed with us and made it uncomfortable in the end.

That's what fans should like about this team. They may not win every game. Okay, they may not win most games, but it's not because they mailed it in. They know they come into work most nights over matched by experience, and talent. But the will to fight from guys like Evan Turner, Jarred Sullinger and Avery Bradley, make this team extremely watchable and very easy to root for.

Rob Welch1/26/2015 03:06:00 PM
Share
Rob Welch
I have been a die hard Celtics fan since birth, even though I don't really want to talk about the ML Carr/Rick Pitino Eras but I will if necessary.
Newer
Older