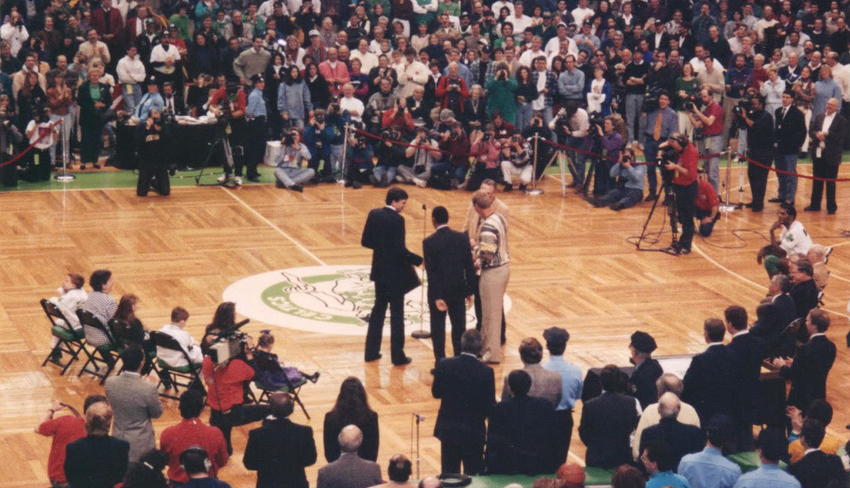 Twenty-one years ago today, Kevin McHale's jersey was raised into the rafters. The Boston Herald's Steve Bulpett wrote a great piece filled with all kinds of gems from McHale. Reminiscing about his times in green, McHale didn't hesitate to express his permanent affinity for Boston:

“I always thought having your number retired in Boston was like going into the Hall of Fame,” said McHale, who entered the latter in 1999. “It was a great honor.

“When you play in Boston and you’re talking about (Bill) Russell and the Jones Boys (Sam and KC) and (John) Havlicek and all the great players that came before you and you look up there, you think, wow, this is kind of a big thing. I would walk out and look up at the rafters, and to have your number put up there and have three banners up there that you were a part of, it felt special.

Obviously, since retiring McHale has revisited Boston often as the enemy. He coached the Timberwolves before his current stint in Houston. While he treasures his time with the Celtics, McHale admitted visiting the TD Garden just doesn't resonate with him:

“This is a different arena for me,” said McHale. “My memories are of the old Garden where I played. I love coming back to Boston and stuff, but the arena itself is no different than playing in Brooklyn. It’s a new arena that has none of the old rattiness of the old Boston Garden that we all loved so much.”

While the arena McHale remembers may have changed, his mark in Celtics lore will remain immortalized in history.