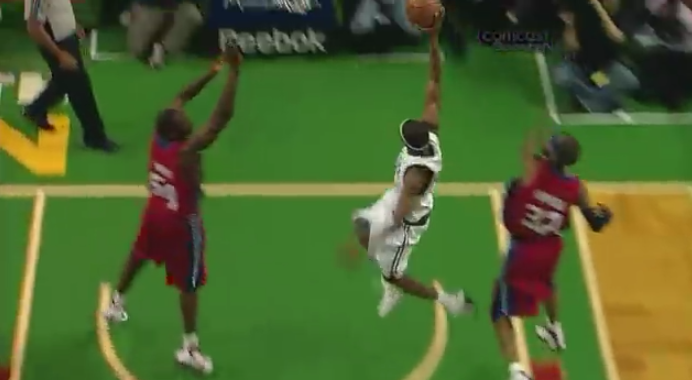 Detroit was the top seed in the East the season before, and entered this game with a record of 44-16.  The Celtics were in the first year of the "New Big Three Era," still trying to prove themselves as legitimate contenders despite cruising along at a 46-12 pace.  The two teams had split a pair of meetings earlier in the season, with each club winning on the other's home floor.  This contest was a showdown for Eastern Conference supremacy going forward.

At the time Rajon Rondo was an untested point guard in his first year as the starter, considered by many to be the Celtics' weak link.

With Boston clinging to a five-point lead midway through the third quarter, Rondo decided it was time to announce to the world his intentions of becoming a force to be reckoned with in the NBA:

My seats in the TD Garden are in the lower corner behind the basket Rondo dunked on.  Watching the play unfold, I noticed him begin to accelerate, then kick it into high gear.  As Rondo charged right in my direction I remember thinking to myself "Holy $#*%, he's going to dunk this."

The audio in the clip does not even begin to do justice for how nuts the Garden went after Rondo threw down that jam in Jason Maxiell's face.  What blows my mind about the play is that Rondo clearly decided he was going to dunk before he even crossed half court--and with the other nine players on the floor all in front of him.

Rondo finished the game with 16 points, five assists and two rebounds.  With the win that day the C's became the first NBA team to clinch a playoff spot that season.  Rondo's dunk was the defining moment of a game that propelled Boston to the No. 1 record in the league, and set the stage for the Celtics' Conference Finals victory over the Pistons on the way to Banner 17.


No. 2: "One of the most outstanding playoff performances in NBA history"

No. 3: "The diving hustle-play unlike any other"No. 4: "The night his elbow bent the wrong way"No. 5: "The greatest triple-double in 44 years"