Celtics can't overcome slow start and lose to the Magic: 100-95 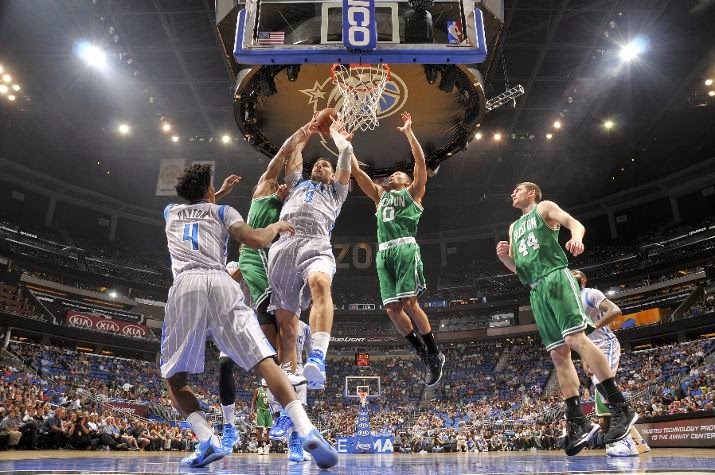 Jameer Nelson, the all time assist leader for the Orlando Magic, made his first start in Celtic green against the franchise where he starred for a decade.

Unfortunately, this did not inspire Boston as they started out 0-10 from the floor and finished the quarter with a mere nine points on 2-22 shooting.

Nikola Vucevic dominated the overmatched Celtic bigs (mostly Zeller) in the paint and had 10 points 6 rebounds and 2 assists in just under 9 and a half minutes.

Very few positives for the Celts other than the possibility of Avery Bradley getting out of his shooting slump after hitting a couple of jumpers late in the quarter.

Ben Gordon had 8 points on 4-4 shooting including some really nice runners for the Magic.

Magic with 46 points in the paint up to this point with rookie point guard Elfrid Payton having one of his best games as a pro with 12 points and seven assists after three.

Boston opened the fourth on a 12-2 run cutting the Orlando lead to 15 with just over eight to play.

With Jameer Nelson, Brandon Bass, Evan Turner, Jae Crowder and Brandan Wright on the floor Boston cut the lead to ten with barely over five minutes left in regulation.

Celtics went to hack a Elfrid with the score the same and the rookie missed two free throws with 3:49 to play.

Celtics down 87-90 after two free throws and a layup in transition by Zeller followed by a Kelly Olynyk three with 2:33 on the clock.

Jameer Nelson with five points and five assists so far in the quarter.

After a Tobias Harris jumper barely snuck in Olynyk was charged with an offensive foul for pulling down the close out defender Kyle O'Quinn.

The refs may have missed one as Olynyk looked like he could've been fouled initially on the shot.

After this momentum stopping call it appeared as though the Magic may have the game in hand until Avery hit another three cutting the Orlando lead to 98-95 with 22.9 left on the clock.

Orlando's Harris hit one of two free throws after being fouled but a three by Jameer Nelson fell well short as the Magic went on to the 100-95 win.