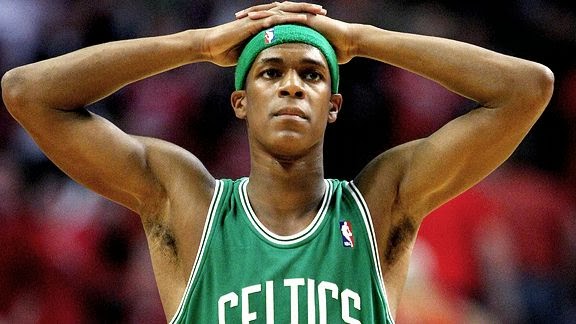 Starting to feel like this thing is going to be over sooner, rather than later. Coming from Ramona Shelbourne, ESPN's top hoops reporter in Los Angeles, the Lakers have made a pretty serious offer for the services of Rajon Rondo.

While it might be difficult for Celtics fans to see Rajon Rondo dawn the purple and gold jersey, to me, this offer is significantly more attractive than any package the Dallas Mavericks (and probably the Houston Rockets) could assemble.

To me, the Lakers have grown disenchanted from reality. They're a terrible, terrible basketball team, and I'm not sure how much Rajon Rondo could help them in an extremely competitive West. Put it this way; a quarter way through the season the Dallas Mavericks' winning percentage is above 70%, and they're still only a six seed.

Think about how many things need to go right for the Lakers in order for them to be a playoff team next season. Kobe needs to play 82, and he needs to play them at least as well as he is this year. Julius Randle has to be ready to go out of the gates, Rajon Rondo has to be the best version of Rajon Rondo, AND they probably still need to add another free agent. And even then? Are they really that much better than, say, the New Orleans Pelicans?

Based on the Stepien rule, which forces a team to own at least one draft pick every other year, this complicates the potential trade a little. Which I believe means that the trade would have to be EITHER Houston's first round pick or the Lakers' 2016 first and another pick that'll come no earlier than 2019.

The Lakers inquired about a deal Thursday that would send forward Jordan Hill and a first-round pick to the Celtics for Rondo and forward Jeff Green, but the Celtics declined that offer, a person familiar with the details told USA TODAY Sports.