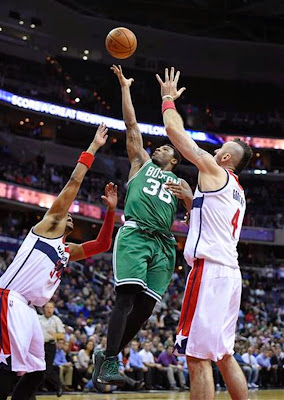 “And Marcus is one of the few guys on our team that really can inspire by the way he plays. The thing with young players is it’s always a matter of consistency.

And Smart did just that; leading the Celtics out of their 23-point deficit to force overtime twice versus a Washington Wizards team that is regarded as top three in the Eastern Conference.

Following Brad Stevens subbing in Smart at the 5:21 mark of the third quarter the momentum shifted in the Celtics favour leading coach Stevens to stick with Smart and the rest of the bench for the remainder of the game.

While the bench ultimately failed to contain John Wall in overtime and deliver a win they did manage to score 82 points to set a new franchise record.

Today, Smart was asked if the performance would change the way he approaches the rest of the season:


“No,” said Smart, who is still shaking off the effects of a sprained left ankle. “Not at all. Back to being humble. That was just one game. That’s what it is. We’ve still got to come back and play (tonight).”

“When you’re trying to do whatever to help the team win, you do whatever it takes,” he said. “I’m ready whether I have to play five minutes or two minutes. It doesn’t matter.”