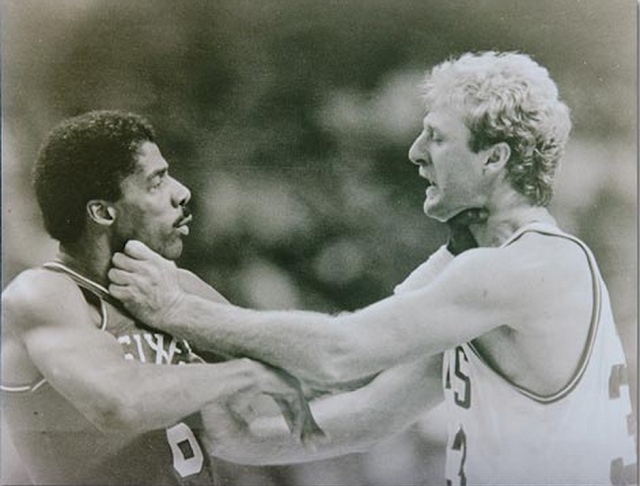 
On Nov. 9, 1984, two of the NBA's biggest stars were involved in an on-court brawl.
The Boston Celtics (4-0) hosted the Philadelphia 76ers (5-0) at the Boston Garden on that night. It was expected to be a great battle between two undefeated teams, with Larry Bird and Julius Erving going head-to-head.

However, the showdown will forever be remembered for the fight that broke out late in the third quarter rather than either player's performance in the game.


A constant debate among NBA fans, analysts, and bloggers alike is how would players in the modern day NBA fair in the "glory days" and vice-versa. The ONLY answer to this question is "it was a different era and you can't really compare the two."


LeBron might have been able to hang with the greats on the stat sheet back in the day, but I'm pretty sure once punches started flying it would be a different conversation. "Oh LeBron's heating up? Someone go in there and break his ankle." "Oh Kobe is on his way to 40? Get in there and forearm him in the throat." "Oh Rondo is going to set the record for assists in this arena? You two hold him back and then you superkick him into next week." It was just a different era.

Having said that, what is better than this clip to start your day? A seminal moment in Celtics history. Bird, the greatest trash talker in the game, backing up his words, going right at Irving, and then the boys start swinging AWAY. If this happened today, every person from the towel boy to the media covering the game would have been fined, suspended, fired, and then probably deported. Today's NBA just doesn't operate like this anymore. Do some deep YouTubing - the 70's and 80's NBA was essentially the wild west.

While both Bird and Irving got ejected, but here are the stat lines for that night:

Different era. Let's leave it at that.