Brad Stevens says Marcus Smart 'looks great.' So what was the deal with that overreaction? 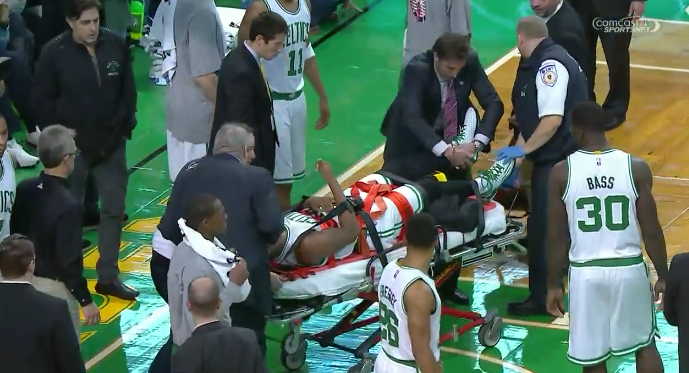 Yeah, I mean, when you first saw it you think, 'Wow, it could be longer than three weeks. He’s gotta heal well and continue to do his treatment. If he does his treatment diligently, he’ll be back sooner rather than later. Because [the medical staff] really work[s] hard to get these guys back. I anticipate him being back; he’s a pretty diligent kid. He works pretty hard at it.


Forsberg adds that the team expects Smart may back "before the end of the month."

So what's the deal with that dramatic exit Marcus?

I was watching the game in a bar last Friday night, only keeping one eye on the television (with no volume).  All of a sudden I see Smart down on the ground and it seems bad--real bad.  Then the replay comes on and I think "Huh, that just looks like he turned his ankle."  I wonder if he broke something in his leg somehow, or tore a bunch of ligaments.  They bring out the stretcher and I'm reminded of Kevin Ware and Paul George.  Smart gives the "thumbs up" as he's wheeled off like an NFL player who's just had his spine snapped but is showing us he still has movement in his upper body.

And then shortly after we find out it's just a sprained ankle after all.