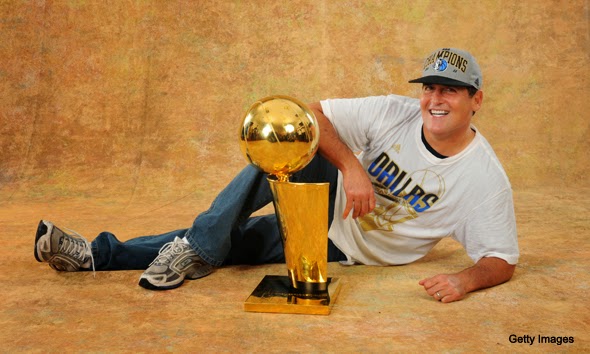 "And with the first pick in the 2015 NBA Draft the Oklahoma City Thunder select Jahlil Okafor, center out of Duke University."

No, you did not sleep through the season and no the Thunder did not win the lottery, but if Mavericks owner Mark Cuban was running the show in OKC, he'd try to make that dream-like scenario a reality.

In an interview with ESPN Dallas' Tom MacMahon, the ever vocal billion wondered aloud if the Thunder should rest their ailing superstars, Kevin Durant and Russell Westbrook, and call this season a wash.


"The question I don't think anybody has asked is, why don't they pull a David Robinson and try to get Tim Duncan?" Cuban said, speaking before the Mavericks hosted the Miami Heat.

Cuban is eluding to when the Spurs sat David Robinson and drafted Tim Duncan with the first overall pick.

I love that Cuban publicly said this. It smacks all of the NBA executive and owners right in the face when they say tanking doesn't exist and that they "try and put the best possible product on the court."

Of course teams tank. You'd be stupid not to at least think about it.

Small market teams, like Milwaukee and Utah, can't lure players in via free agency. They need to draft them and try to sell them on the fans, the city and the whole loyalty shpeal.


"We already specialize in a race to the bottom," Cuban said. "More participants won't change anything. They're all high-profile participants."

As much as I love Wyc, no one other than Mr. Shark Tank himself has the stones to talk about actually tanking.


"I'm not suggesting anything," Cuban said. "I'm just curious why the question hasn't been asked because I'm curious what the answer is."

To MacMahon's credit, he does try to call Cuban's bluff recalling the 2012-13 season when he had an injured superstar in Dirk Nowitzki and why he didn't tank.

Doesn't really explain why they didn't tank, but that's the best answer we'll get. I love that he threw in that caveat that they'd never get No.1 because it just shows he'd be at least open to it if they had an actual shot of sucking enough.

Read more of my work at here