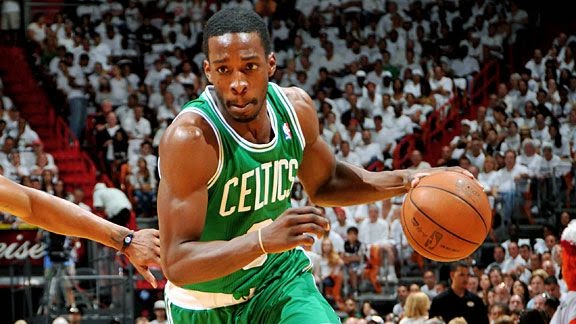 Jeff Green is sick and tired of being labeled as 'indifferent.' On the court, he's been consistently more aggressive in attacking the hoop, and has seemed to be show more visible displays of emotion in ten games than he has throughout his entire career.

But he's not content with just showing his change in demeanor on the court. After another loss against Portland on Sunday, Jeff Green put the media ON-BLAST.


"Before you start, I just want to clear the air about some B.S. rumor that came out," Green declared. "I don’t know if the person who made this article is in this [locker room] but the rumor about me wanting to get traded is definitely false. I said that I was frustrated with losing, not frustrated with the team. So if the words didn’t come from my mouth, I'd appreciate if you do not write a dumbass article like that."

Here's the thing, though; no one's exactly sure what report Jeff Green is refuting. A quick google search of 'jeff green wants out of boston' finds plenty of articles (such as this) documenting how angry Jeff Green was, and how it's completely untrue that he wanted out of Boston. But there are literally none that indicate else wise.

As the Boston.com article points out, Green did exclaim that he was 'tired of losing,' but no outlet that I, or anyone else, can find spun that sentence to imply anything more than frustration with another disappointing loss.