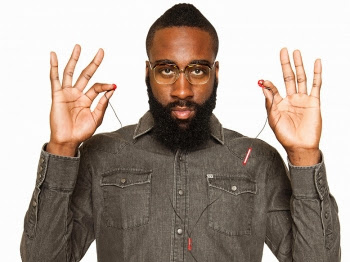 Let me paint a picture for you; It's the third game of the night in your men's league. The fattest guy on your team made what would seem to be his 42nd bad pass of the night, and it's led to a turnover. You know what happens next; the other team starts a break, and your fat teammate (me) decides he's hit his breaking point, and there isn't a chance in hell he's going to get back on defense.

And while that's kind of an obnoxious move in your men's league, it's just a teeny bit worse at the professional level. Enter, James 'The stretched out mitten' Harden, who just doesn't have time for this.

Admit it, it took you 3 loops to find him.