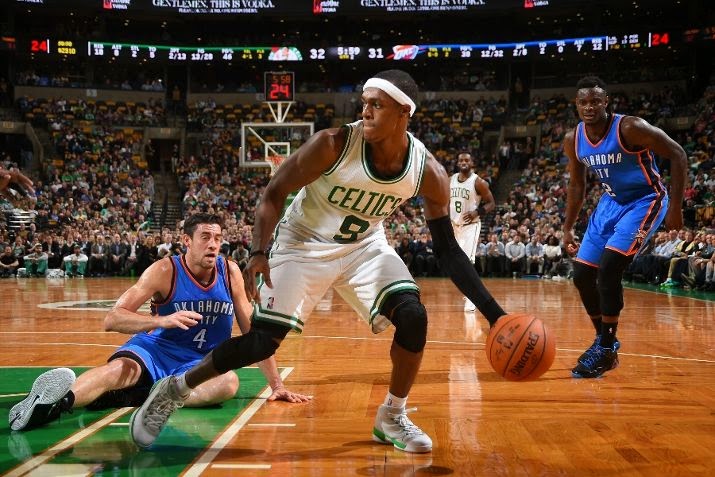 The Celtics lost to the Thunder 109-94, falling victim to OKC's zone defense as they blew a 15-point lead. Rajon Rondo nearly had a triple-double for the Celts (20-12-9), while every starter for Boston was in double figures scoring wise. For the Thunder (or what's left of their roster), it was Anthony Morrow and Reggie Jackson leading the way (28 points apiece).

As has become tradition, the Celtics started fast in this one -- outscoring the Thunder 18-3 over the first six minutes. Leading the way were Jared Sullinger (6 points) and Rondo (5), as the Cs started red hot while the Thunder missed 10 of their first 11 shots. However, as has also become tradition -- the 'Bad' Celtics reared their head following the quick start, as OKC immediately went on a 21-7 run of their own to cut the deficit all the way down to one.

The Celtics stabilized once Rondo and the rest of the starters returned, eventually building a nine point lead heading into halftime. Rondo finished the first half with 10 points, 8 rebounds, 6 assists, 2 steals and a +17 rating, as he showed no ill effects of the Saturday screw removal surgery.

When the second half began, the Celtics had all kinds of issues with the Thunder's zone. The ball stopped moving, the forced jumpers showed up, and a nine point lead turned into a four point deficit by the time the third quarter ended. The Celts bench was just horrible in this one, specifically Evan Turner and Phil Pressey, who combined for just 4 points, 2 boards and 2 assists on 1-8 shooting with a horrendous -35 +/- in 29 minutes.

As bad as the third quarter was, the fourth was worse. Way worse. Morrow and Jackson lit the Celtics up on one end of the floor, while the Celts offense simply died on the other end. The Celts were outscored 33-22 in the final frame, with six of those points coming in garbage time courtesy of Rondo threes.

Boston badly needs to work on their offense against the zone. Especially such a simple zone like OKC was playing. An NBA team should never be that incompetent when the other team switches things up.

Next up: LeBron James and the Cavs, Friday night at the Garden.